Denmark charges 3 with planning to carry out terror attack

COPENHAGEN, Denmark (AP) — Three people have been charged with planning terrorist acts by acquiring weapons and bomb-making materials ”to be used in a terrorist attack in an unknown place in either Denmark or abroad,” a Danish prosecutor said Monday.

The suspects, two men and a woman in their thirties, were not identified in line with Danish practice. They were arrested on Feb. 2021 and remain in pre-trial custody.

“It is … our opinion that the plans (to carry out attacks) failed because (the suspects) were arrested by the police,” public prosecutor for Copenhagen Lise-Lotte Nilas said in a statement.

Beside being charged with attempted terrorism, they also were charged with financing terrorist activities by transferring money to a person affiliated with the Islamic State group.

If tried and convicted, they face potential life sentences — which in in Denmark usually mean 16 years in prison.

Denmark’s TV2 broadcaster said the men were Syrians and one of them is married to the woman, who is of Iraqi origin.

All three face a trial in Holbaek, some 50 kilometers (31 miles) west of Copenhagen, starting Aug. 22. 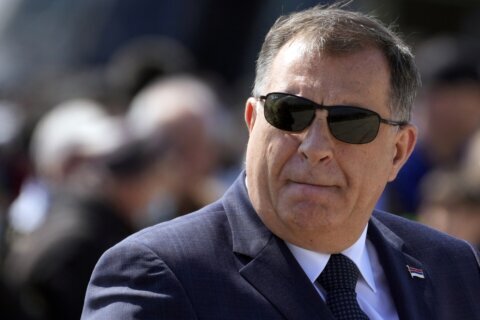