LONDON (AP) — Northern Ireland’s largest unionist party, which lost last week’s local elections, refused Monday to return to a power-sharing government saying it will not do so until its demands over post-Brexit customs arrangements are met.

Democratic Unionist Party leader Jeffrey Donaldson was among political leaders that met with Britain’s Northern Ireland Secretary Brandon Lewis, who urged them to come together to resurrect a paralyzed Northern Irish government.

It was a milestone for a party long associated with the paramilitary Irish Republican Army, which sought to use violence to take Northern Ireland out of U.K. rule.

But while Sinn Fein now has the right to the position of Northern Ireland’s first minister, a functioning Executive cannot be formed unless the DUP, as the largest unionist party, agrees to take the role of deputy minister under the region’s mandatory power-sharing rules.

Donaldson said Monday he made clear to Lewis that the DUP will not nominate ministers to the Executive unless the U.K. government takes “decisive action” on new Brexit customs rules known as the Northern Ireland Protocol.

“They gave a firm commitment to protect our place in the U.K. internal market. They have not done so, they have failed over the last two-an-a-half years to honor that commitment,” Donaldson said.

The unionists are strongly opposed to new customs and border checks on some goods entering Northern Ireland from the rest of the U.K. that were introduced after Britain’s exit from the European Union.

The special arrangement was meant to prevent the return of a hard land border with the Republic of Ireland. Keeping that border open to the free flow of people and goods is a key pillar of the Northern Ireland peace process that ended decades of bloody conflict.

But unionists argue that the new checks have created a barrier between Northern Ireland and the rest of the U.K. that undermines their British identity, and want them scrapped.

Northern Ireland has been without a functioning government since February when the DUP’s leader at the time, Paul Givan, quit as first minister in protest over the post-Brexit rules.

Britain’s Conservative government is trying to get the EU to agree to major changes, but negotiations have reached an impasse.

Speaking after Monday’s meetings with party leaders, Lewis said London will “take nothing off the table” in its negotiations with the EU.

“The U.K. government’s overriding priority remains the preservation of peace and stability in Northern Ireland,” he said. “The current situation with the protocol is fundamentally undermining the Belfast (Good Friday) Agreement and creating an unacceptable situation in Northern Ireland.”

Sinn Fein’s vice-president, Michelle O’Neill, stressed that she wanted to serve as a “first minister for all” and work in partnership with other parties.

“I accept this election represents a very significant moment of change,” O’Neill said. “As a first minister for all, I intend to work with those from different political perspectives through partnership and not division.”

The Northern Ireland Assembly has a week to meet and allow the newly-elected legislators to take their seats. Assembly members will then choose a Speaker and ministers, starting with the first and deputy first ministers.

If, as seems likely, no executive can be formed, ministers from the previous government will stay in power as a caretaker administration. A new election must be held if there is still no executive after 24 weeks. 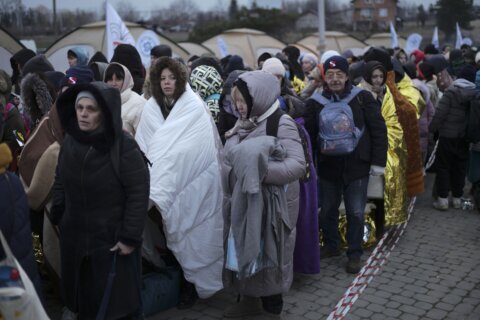