The trans-Atlantic sparring follows British Prime Minister Boris Johnson’s government announcing its intention to introduce legislation that would allow it to unilaterally suspend the Northern Ireland Protocol, an international agreement between Britain and the European Union.

Northen Ireland is the only part of the U.K. that shares a land border with an EU nation — the Republic of Ireland — and required special attention when the U.K. withdrew from the EU.

The protocol is designed to preserve the Northern Ireland peace process, but unionists complain it has created a trade barrier between the province and the rest of the U.K.

Pelosi said Thursday that Britain’s actions threatened to undermine the 1998 Good Friday Accords that ended decades of violence in Northern Ireland. She called for “good-faith negotiations” to resolve any differences over the protocol.

“As I have stated in my conversations with the prime minister, the foreign secretary and members of the House of Commons, if the United Kingdom chooses to undermine the Good Friday Accords, the Congress cannot and will not support a bilateral free trade agreement with the United Kingdom,” Pelosi said.

Prime Minister Boris Johnson’s spokesman, Jamie Davies, said the U.K. remains committed to reaching an agreement with the EU and has invited the bloc’s Brexit chief, Maros Sefcovic, for talks.

“We welcome that the U.S. shares our deep commitment to the Belfast Good Friday Agreement and the peace process and has urged the EU to show flexibility,” Davies said.

Jeffrey Donaldson, a member of Parliament and leader of Northern Ireland’s Democratic Unionist Party, said the protocol itself is undermining the peace process because it threatens the key principles of the Good Friday Accords, also known as the Belfast Agreement.

“If Nancy Pelosi wants to see the agreement protected, then she needs to recognize that it is the protocol that is harming and undermining the agreement,” Donaldson said. “And that is why we need to deal with it.”

In a historic shift at the ballot box, the nationalist party Sinn Fein came in first in the vote for the Northern Ireland Assembly this month. But t he DUP has refused to take part in a new power-sharing government in Northern Ireland until differences over the protocol are resolved.

Irish Prime Minister Micheal Martin is due to to hold talks with party leaders Friday in Belfast.

Martin said the EU took “decisive action” in October to resolve concerns over the protocol, but the British government has failed to respond.

“This idea that somehow the European Union is being inflexible on this is just not the truth, it doesn’t stack up,” Martin told the BBC, “What has happened now is a certain unilateralism on behalf of the British government saying ‘our way or no way.’ And you don’t negotiate with the European Union on that basis, particularly when you have signed off on the agreement that you now don’t like.” 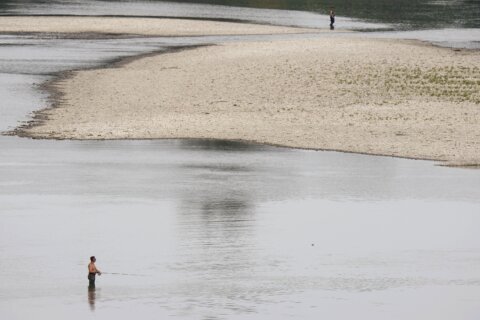