PARIS (AP) — A suspect in the 2018 killing of Saudi journalist Jamal Khashoggi was arrested Tuesday in France, according to a French judicial official.

The official said the suspect was being held on the basis of a Turkish arrest warrant. He requested not being named in accordance with the French justice system’s customary practices.

French radio RTL said the Saudi national, Khalid Aedh al-Otaibi, was arrested at the Roissy airport near Paris as he was trying to board a flight to Riyadh.

Al-Otaibi was one of over a dozen Saudi officials sanctioned by the U.S. Treasury in 2018 over Khashoggi’s killing and dismemberment at the Saudi Consulate in Istanbul in 2018.

He was also mentioned in the declassified U.S. intelligence report that said Saudi Crown Prince Mohammed bin Salman had “approved” the operation that killed Khashoggi. The report used an alternate English transliteration of his last name.

The Saudi Embassy in Paris said the arrested man “had nothing to do with the case in question,” and said the embassy expects his immediate release. It noted that Saudi Arabia already held a trial over the killing, though it was behind closed doors and the verdicts were criticized by rights groups and others for not holding to account or finding guilty anyone responsible behind organizing , ordering or overseeing the operation that killed Khashoggi.

French authorities were on Tuesday evening verifying the suspect’s identity.

“Sometimes governments close their eyes about people who are pursued by justice in another country. I note with satisfaction that there was an arrest, and the police didn’t close their eyes this time,” he told The Associated Press.

Al-Otaibi “is someone we have been following for a long time,” Deloire said. RSF has lobbied multiple governments to seek justice for Khashoggi’s killing, and filed a lawsuit in Germany for crimes against humanity over the case.

There was no immediate comment from Turkey over the arrest.

French media report the suspect is going to be notified about the arrest warrant by a prosecutor on Wednesday. He can accept or refuse to be transferred to Turkey. If he refuses, a judge will decide whether he remains in custody pending the review of the case and a possible extradition process, which could take months.

The arrest comes as Saudi Crown Prince Mohammed bin Salman continues his first regional Gulf tour since the killing. He traveled Tuesday from Oman to the United Arab Emirates.

The prince met with French President Emmanuel Macron on Saturday in Saudi Arabia. Macron said they notably had talks about human right issues.

Hatice Cengiz, the fiancee of Jamal Khashoggi, said in a statement the arrest of the suspect, if confirmed, is “a very significant first step for justice for Jamal…Justice must be allowed to take its proper course… Most importantly, those who executed the plan must not be used to shield those much higher up who gave the order for Jamal’s brutal killing, including the Crown Prince himself. They must also be arrested and prosecuted.”

“If this is all true, this is the first step that should continue until justice is served and until the person who ordered the killing also faces justice,” said Abdullah Alaoudh, director of Gulf issues at DAWN, a U.S.-based organization envisioned by Khashoggi before his murder to support democracy and rule of law in the Arab world. Alaoudh’s own father, well-known Islamic scholar Salman Aloudah, is among those detained in the kingdom since 2017 under the crown prince. He was arrested shortly after a tweet perceived as not supportive of the Saudi embargo against neighboring Qatar at the time— a spat that has since ended.

The arrest comes as the crown prince works to move away from the stain on his reputation internationally and woo back big name Western investors and celebrities. Human rights activists have urged celebrities and sports stars to boycott events in Saudi Arabia, arguing they serve to distract from the country’s crackdown on critics and that such events happen only with approval of the crown prince. Just this week alone, the kingdom hosted its first ever Formula One race with pop star Justin Bieber performing despite Khashoggi’s fiancée plea for him to not participate in protest. Meanwhile, stars like Hillary Swank and Catherine Deneuve were photographed on the red carpet Monday for the kingdom’s inaugural Red Sea International Film Festival in Jiddah.

Last year, Turkey began trying 26 Saudi nationals in absentia over Khashoggi’s murder after Saudi Arabia refused to extradite them and after Turkish officials dismissed a trial against some of the suspects that was conducted behind closed doors in Riyadh.

In the last hearing in November however, the court in Istanbul requested that the Ministry of Justice contact authorities in Saudi Arabia to determine whether they had been sentenced there to avoid them from being tried over the same offense.

The arrest in Paris comes as Turkey has been trying to improve its frayed relations with the Kingdom and other Arab nations at a time when its economy is faltering.

Khashoggi was killed on October 2, 2018, after he entered the consulate to get documents that would allow him to marry his Turkish fiancee, who was waiting outside. Turkish officials allege Khashoggi, who had written critically about Saudi Arabia’s crown prince for The Washington Post, was killed by a team of Saudi agents and then dismembered with a bone saw.

The Saudi government admitted to the murder under intense international pressure.

The Saudi court proceedings, which were open to select Western diplomats to sit in on, were not open to independent media to observe.

Khashoggi’s family subsequently announced they had forgiven his killers. 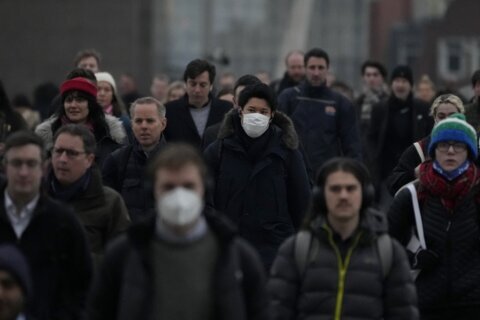