LONDON (AP) — A British couple who sought justice for their son after he died in a vehicle crash said Tuesday they have settled a civil lawsuit they filed in the United States against an American motorist involved in the collision.

Harry Dunn, 19, died in August 2019 after his motorcycle crashed into a car being driven on the wrong side of the road outside a U.S. airbase in central England.

The car’s driver, Anne Sacoolas, left for the U.S. several weeks later along with her husband, Jonathan, a U.S. intelligence officer at RAF Croughton. Sacoolas was able to leave Britain after the collision because the U.S. government invoked diplomatic immunity on her behalf.

British authorities filed criminal charges against her and sought her extradition, and British officials have repeatedly brought up the case during high-level international talks.

The U.S. government rejected the extradition request, causing an outcry in Britain and becoming a source of tension in the U.K.’s relationship with the United States.

The Dunn family then filed the civil lawsuit in the District Court in Alexandria, Virginia, seeking damages.

Radd Seiger, the Dunn family’s spokesperson, said Tuesday the two sides have reached a “resolution” in the civil damages claim.

British Prime Minister Boris Johnson called the Harry Dunn case “very sad” when he and President Joe Biden were asked by a reporter about the settlement as the two leaders met in Washington on Tuesday.

Johnson added that Biden “has been personally trying to move things along,” but did not offer any details of the president’s effort. Biden said he was unaware of the settlement. 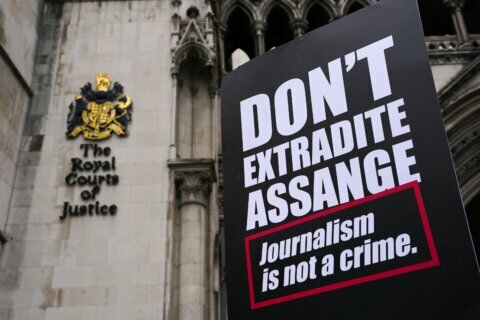