Pope visit a sign of inclusion for Slovakia’s excluded Roma

KOSICE, Slovakia (AP) — Pope Francis on Tuesday urged Slovakia’s Roma to integrate better into the mainstream as he met with the country’s most socially excluded minority group, who have long suffered discrimination, marginalization and poverty.

But in some ways Francis’ visit to the Lunik IX settlement in the eastern city of Kosice brought home just how excluded the Roma are: Slovak police and soldiers lined tall fencing along the main route into the neighborhood, preventing residents who hadn’t registered in advance from accessing the small seating area for the event.

Despite the problematic optics, the visit was nevertheless a highlight of Francis’ four-day pilgrimage to Hungary and Slovakia. The trip marks his first outing since undergoing intestinal surgery in July and the restart of his globetrotting papacy after a nearly two-year coronavirus hiatus.

Lunik XI is the biggest of about 600 shabby, segregated settlements where the poorest 20% of Slovakia’s 400,000 Roma live. Most lack basics such as running water or sewage systems, gas or electricity.

Francis acknowledged Slovakia’s Roma had long been subject to “prejudice and harsh judgments, discriminatory stereotypes, defamatory words and gestures,” and even misunderstandings on the part of the Catholic Church. His visit alone could help change attitudes among Slovakia’s majority, many of whom would never visit a neighborhood that until recently police refused to enter at night.

But Francis, 84, urged the residents to think of future generations in trying to overcome their own prejudices, obstacles and longstanding mistrust of the Slovak majority, and try to integrate better so their children can have a brighter future.

“Their great dreams must not collide with barriers that we have erected. They deserve a well-integrated and free life,” Francis told the crowd. “Courageous decisions must be made on behalf of our children: to promote their dignity, to educate them in such a way that they can grow up solidly grounded in their own identity and be given every opportunity they desire.”

Roma have long suffered racism and discrimination in Slovakia and elsewhere in Central and Eastern Europe, and continue to face huge hurdles in employment and education. The mistrust is reciprocal, with some Slovaks blaming the Roma for crime and Roma distrusting state institutions that have long failed them.

That distrust was on display during Francis’ visit, with a far more robust Slovak security presence than at any of Francis’ other stops, literally keeping the Lunik residents behind wire fencing.

Vladimir Fabian, spokesman for the city of Kosice, said residents had been given the chance to register to attend the event, but many didn’t. In addition, anyone who wanted to attend had to show proof of vaccination, a negative test or proof of recovery from COVID-19.

The fence was erected for security reasons, Fabian said, adding that security also dictated that residents were told to stay in their buildings and watch the pope from their windows.

The Rev. Marian Deahos, a Salesian priest who works with the Roma in a nearby community, said Francis’ call for greater integration may fall on deaf ears given the deeply felt barriers the Roma have about integration and the “racism” some Slovaks have toward them.

“The biggest problem is that we, Slovaks, consider the Roma to be under us, less than us, that they steal, they don’t work and have problems with us,” Deahos said on the sidelines of the Lunik event. While some Roma are able to work and live in mixed neighborhoods, those in Lunik haven’t managed to because either they don’t believe they can or don’t have the education or means to, he said.

The residents of Lunik IX have faced a compounded hurdle: The settlement was originally a neighborhood where Roma families lived alongside the families of service members and police officers, a communist-era measure to keep law and order. Kosice authorities later moved Roma from other parts of the city to the neighborhood, essentially confirming its ghettoization and the forced separation of Roma from the mainstream.

“Marginalizing others accomplishes nothing,” Francis told the crowd. “Segregating ourselves and other people eventually leads to anger. The path to peaceful coexistence is integration: an organic, gradual and vital process that starts with coming to know one another, then patiently grows, keeping its gaze fixed on the future.”

Francis sought to highlight the example of Roma who had left or otherwise integrated more fully into Slovak society. His encounter featured one resident — Ján Hero, 61, who married a Slovak woman — and a family of four who got out of Lunik IX with the help of the Salesian priests who minister to the community.

“Thanks to this, we can today offer our children a life that’s happier and more dignified and peaceful,” said one of those who left, René Harakaly. Noting that she still has family members in Lunik IX, she added: “We hope that your visit brings a new hope and passion for an internal transformation to those here today.”

Lunik IX mayor Marcel Sana, a resident since he was 2, has overseen a host of public works since taking over in 2014, including improving sanitation and security. The local school is well-regarded, and playgrounds have opened for local children.

“When I took over the office, my vision was to make Lunik IX a quarter like all others in Kosice,” Sana said. “But after everything was neglected for 20 or 30 years, we need time to make it happen.”

Residents said Tuesday that some things had already changed in the runup to Francis’ visit, with fresh paint on building exteriors.

“We have new roads, new stairs, they repaired everything,” said resident Alexander Horvath.

The “pope of the peripheries” has long sought to meet with society’s most marginalized during his foreign trips, making sure to always include visits to slums, ghettos or prisons where he can offer words of encouragement and welcome.

Francis started his penultimate day by celebrating a Byzantine rite Mass in Presov, near Kosice, in recognition of the country’s Greek-Catholic believers. During the chant-filled, open-air Mass, Francis took a swipe at European politicians who often brandish crosses to emphasize their Christian credentials.

“Crucifixes are found all around us: on necks, in homes, in cars, in pockets,” he said. “Let us not reduce the cross to an object of devotion, much less to a political symbol, to a sign of religious and social status.”

Organizers said more than 30,000 people attended, and they received the Eucharist via small spoons, as is done in the Eastern rite.

Well before Francis’ arrival they had filled the outdoor site as a choir sang hymns. They cheered and wildly waved the yellow-and- white flags of the Holy See as Francis looped through the crowd in his popemobile.

“We came here at 3 a.m. to get the best spot,” said Slavka Marcinakova, a resident of Presov. “Pope coming to Slovakia — you have an opportunity like this only once in a lifetime. We are so happy for that.” 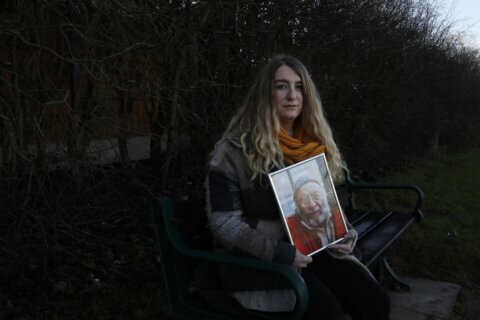 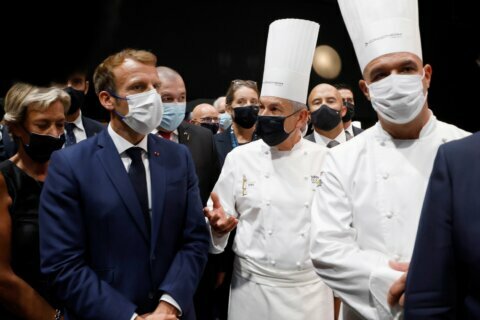