Lebanese Prime Minister Najib Mikati is on his first foreign trip, days after his government was confirmed by parliament. The confirmation ended a 13-month deadlock that came as Lebanon is struggling with an economic meltdown and rising poverty.

“You have an immense and historic responsibility,” Macron told Mikati during a joint press conference at the Elysee. “We will do everything to help you succeed.”

Throughout Lebanon’s crisis, France had taken the lead among the international community in helping the small Mideast country, a former French protectorate. Paris has hosted aid conferences and pushed for reform, and last year, Macron presented Lebanese politicians with a road map for policy change and reforms. At the time, his hands-on approach failed to push bickering Lebanese politicians into action.

Macron said Friday that Lebanon faces a “humanitarian emergency” and promised France would help in efforts to “mobilize the international community to respond to the most urgent needs.”

“We have an opportunity to advance concretely on the path of reforms,” Macron said, adding that international support can provide more help once energy and public finance sector reforms are launched.

“The path is arduous and the task is difficult,” Macron said. “We are here. France will remain at the side of the Lebanese people.”

Mikati’s government is expected to undertake critically needed reforms while grappling with rising public anger and tensions resulting from the deepening hardship. He said he will be counting on France’s support during talks with the International Monetary Fund to negotiate a recovery package, a priority for the new Cabinet.

Mikati had said he would lift subsidies by the end of September as Lebanese foreign reserves run dangerously low and the central bank said it could no longer support its $6 billion subsidy program.

A billionaire businessman and one of the richest men in Lebanon, this is Mikati’s third turn as premier. He is widely seen as part of the entrenched political elite and few believe he can chart a path for reform with a government that leaves power in the hands of the same political parties the public blames for corruption and mismanagement of Lebanon’s resources.

In Beirut, dozens of Lebanese depositors protested outside a few private banks in the city center Friday, demanding access to their hard currency deposits which have been de facto locked since the financial and economic crisis unfolded in late 2019.

The protesters hurled eggs and tomatoes at the bank buildings, prompting angry bank employees to shout at them. Lebanese security forces pushed the crowd back.

Private banks have imposed informal capital controls, limiting withdrawals, transfers and effectively preventing access to foreign currency accounts. The national currency has since been in a free fall, losing more than 90% of its value. 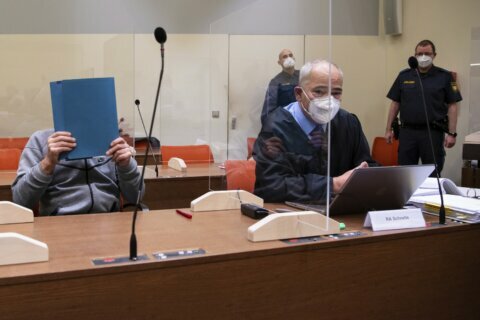