ANKARA, Turkey (AP) — Turkey marked the fifth anniversary of a failed military coup with a series of events Thursday commemorating the people who died trying to quash the uprising against the government.

The observances kicked off with visits to grave sites and memorials honoring the dead, where prayers were held. Turkish President Recep Tayyip Erdogan led a ceremony in parliament before attending other events, including the opening a museum commemorating the crushing of the July 15, 2016 coup attempt.

On that night, factions within the military used tanks, warplanes and helicopters to try to overthrow Erdogan’s government. Heeding a call from the president, thousands took to the streets to oppose the takeover attempt.

A total of 251 people were killed and around 2,200 others were wounded as the coup-plotters fired at crowds and bombed parliament and other government buildings. Around 35 people who allegedly participated in the plot also were killed.

“We will never be a be able to repay the brave men who, through their sacrifices that dark night, brought a (bright) morning for our nation and democracy,” Erdogan said Thursday. “Through its resistance on July 15, our people not only averted a coup attempt but also prevented an attempted occupation (of) our country.”

Two brothers, Huseyin and Cengiz Hasbag, were among thousands of people who rushed to the streets after Erdogan called on the people to resist the attempt. Cengiz died in violence that took place on the Bosporus bridge, which links Istanbul’s Asian and European shores and has since been renamed the July 15 Martyrs’ Bridge.

“I said, ‘Cengiz, I will go out for Allah and the Prophet, and pursue my cause,’” Hasbag told The Associated Press, recalling the night five years ago. “Cengiz said, ‘Brother, I will come too.’”

On the bridge, the brothers began to help people wounded by soldiers taking part in the coup. Hasbag said he then heard a noise that sounded like an explosion.

“I looked at my brother Cengiz. He was martyred by a bullet that entered his right shoulder and chest,” he said.

Government officials insist that Gulen’s network remains a threat to Turkey. In a speech in parliament on Wednesday, Erdogan said his government was determined to go after the network “until the last member is neutralized.”

The government declared a state of emergency after the failed coup and launched a massive crackdown on Gulen’s network. Tens of thousands of people were arrested for alleged links to the coup and to Gulen. Some 4,900 people were sentenced to prison, including around 3,000 who were given life sentences, the state-run Anadolu Agency reported.

More than 130,000 people were fired from public service jobs through emergency decrees, among them teachers and police officers. Defense Minister Hulusi Akar said this week that 23,364 military personnel were fired from the armed forces for their alleged ties to the network.

Critics say the arrests and dismissals went too far and Turkey’s broad terror laws were used to target all government opposition.

More than 100 people with purported links to Gulen were detained abroad or extradited to Turkey to stand trial, including a nephew of the cleric who was reportedly captured by Turkish security in Kenya.

Schools, cultural centers and associations set up across the world by Gulen’s transnational network were shuttered or transformed to institutions tied to the Turkish government.

Turkey has also repeatedly requested the cleric’s extradition from the U.S.

This version corrects name of bridge to the July 15 Martyrs’ Bridge., not the July 15 Bridge. 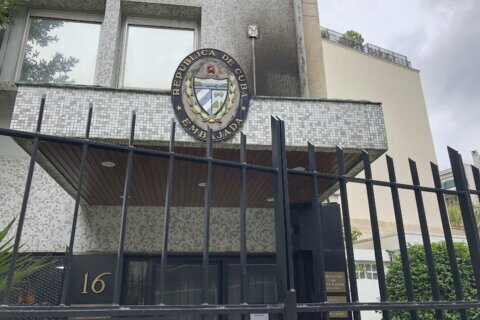 Company officials: A body has been recovered after an explosion at a German chemical complex; 4 people still missing