Turkey aims for dialogue with Taliban on Kabul Airport plan

ISTANBUL (AP) — Turkey’s president said Tuesday his country will talk with the Taliban regarding Turkey’s bid to operate and secure the airport in the Afghan capital, Kabul.

“This process will also be discussed with the Taliban,” he said, adding that the group had previously negotiated with the United States and “should hold these talks much more comfortably with Turkey.”

He stressed that Turkey has always stood with Afghanistan, saying “imperial powers” have been there for decades, including in the past 20 years — an apparent reference to the U.S. deployment that is drawing to a close.

On Monday, Erdogan called on the Taliban to end its “occupation of its siblings’ lands” and said the Taliban’s stance in Afghanistan did not fit how Muslims should treat other Muslims.

The Taliban have been taking strategic border posts and pushing to gain territory in recent weeks, driving tens of thousands of Afghans to flee their homes. Many have been trying to cross to Turkey, with more than 1,450 migrants found by authorities in eastern Van province.

Government forces have regained some posts and are refocusing their resources on strategic points and provincial centers.

Turkey has been negotiating with the U.S. over a proposal to operate and secure the airport. Erdogan reiterated that Turkey would do so only if certain conditions are met and said Washington had asked Turkey to stay on. “First, America will stand with us at the point of diplomacy and diplomatic relations,” he said. The other conditions are logistical and financial support.

An agreement on the protection of the airport has become increasingly urgent as the final withdrawal of the remaining 2,500-3,500 U.S. troops and 76,000 allied NATO soldiers nears a conclusion.

NATO-member Turkey has over 500 troops in Afghanistan and already plays a significant role at the airport but the troops have not served on combat missions.

Turkish-American relations have been rocky for the past few years over a host of problems, including Turkey’s human rights issues, Ankara’s purchase of a Russian-made missile system, Washington’s support of a Syrian Kurdish group Turkey considers terrorists, and the continued U.S. residency of a Muslim cleric whom Turkey accuses of masterminding a bloody failed coup.

Erdogan was speaking during a two-day visit to Cyprus’ breakaway north for celebrations to mark the 47th anniversary of a Turkish invasion that split the island along ethnic lines. 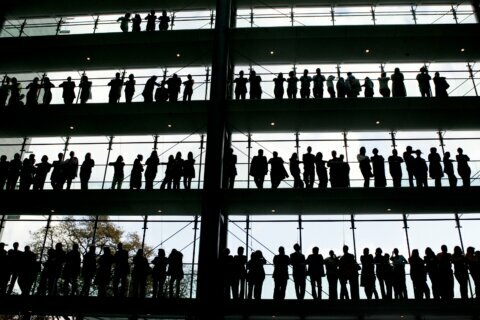 German economy rebounds in 2nd quarter but short of forecast