BUCHAREST (AP) — Moldovan voters go to the polls this weekend in a snap parliamentary election that could decide whether the former Soviet republic fully embraces pro-Western reforms or prolongs a political impasse under strong Russian influence.

The landlocked country of 3.5 million — Europe’s poorest, sandwiched between Romania and Ukraine — has in recent years lurched from one political crisis to another, dogged by instability and stuck in geopolitical limbo between pro-Western and pro-Russia forces.

Although Moldova signed a deal with the European Union in 2014 on forging closer political and economic ties, rampant corruption and lack of reform have hindered development and at times drawn strong criticism from Brussels.

Analysts say Sunday’s election could prove decisive for the future of the country, which gained independence in 1992 but has seen widespread disillusionment with post-Soviet politics, and an exodus of hundreds of thousands of citizens seeking a better future abroad.

“These elections are crucial for Moldova’s future development,” Iulian Groza, executive director of the Chisinau-based Institute for European Policies and Reforms think tank, told The Associated Press. “It is basically a struggle between the incumbent kleptocrats, and new pro-reform elites willing and ready to clean the system from corrupt practices.”

Over three million registered voters will choose Sunday among more than 20 parties, but only four are expected to make it to the 101-seat legislature. The main battle will be between the pro-Reform Party of Action and Solidarity (PAS) and a Moscow-friendly bloc made up of the Communists and Socialists, headed by two former presidents.

Current Moldovan President Maia Sandu, who used to lead the pro-reform bloc, told voters that “this is our chance to cleanse the political class.” She forced the election in April by dissolving parliament shortly after Moldova’s highest court abolished a state of emergency imposed to fight the coronavirus pandemic.

“You decide who will be part of the next parliament and government,” the 49-year-old former World Bank official said in an online post. “It is up to you how quickly we can save the country from corruption and poverty.”

Moldova’s last parliamentary elections in 2019 led to a series of awkward coalitions and occasional deadlock in parliament. Sandu forced the snap polls by twice nominating prime ministerial candidates that were unlikely to be approved by parliament, which then had to be dissolved according to the Constitution.

She now aims to build on her presidential victory last November by securing a clear pro-reform government that she can work with.

“Only our team is able to end the chaos in the country, ensure social protection of people, restore the economy, strengthen statehood,” Dodon, whose party campaigns on high social spending and traditional family values, said earlier this week.

Recent opinion polls have given a lead to the pro-Sandu PAS party, but the result could largely depend on turnout among Moldova’s more than 200,000 diaspora voters. Radu Magdin, an analyst at Smartlink Communications, said a strong turnout likely would mean strong support for the reformists.

“The main question, which could turn everything around, is mobilization,” he said.

“Our nation has been struggling for the last 30 years or so, with little success … it is a lot of work and requires each of us to participate and help to build a new system,” she said, adding that she hopes many Moldovan students living abroad can move back and “believe there is bright future … not just for a few elites but the vast majority of the population.”

The EU has earmarked a 600-million-euro ($710 million) recovery package for Moldova to help the economy recover from the pandemic and boost investment. But Brussels has warned the money is conditioned on judicial and anti-corruption reform.

In Transparency International’s 2020 Corruption Perception Index, Moldova ranked 115th out of 180 countries, with the first place being the least corrupt.

Sabin Rufa, a 20-year-old student at Warwick University in the U.K., believes this election comes at a “crucial moment” in his country’s democratic history.

“I feel this election is perhaps the most important milestone in the last 10 years, especially for the progressive people that wish Moldova to develop in line with democratic standards and institutions,” he said. “I hope that in another 10 years, I will look back to this election knowing that it was a turning point.”

“With all its imperfections, Moldova is where I want to build a future for myself, for my family, and for my compatriots.” 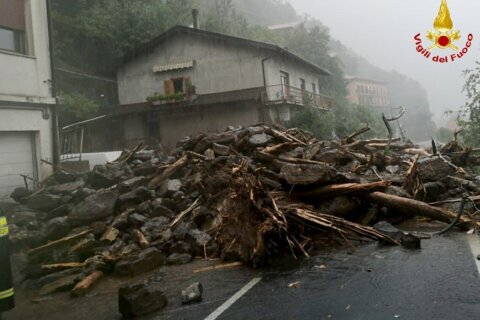