KYIV, Ukraine (AP) — Ukraine’s leader voiced fear Thursday that the U.S. could strike a deal with Russia behind his country’s back, and rebuked France and Germany for a perceived softening of their stance in talks with Moscow.

President Volodymyr Zelenskyy specifically warned Washington that its failure to block the construction of a Russian-built natural gas pipeline to Germany would be a grave political error.

“It would be a loss for the United States, and I believe it would be President Biden’s personal loss,” Zelenskyy said at a news conference. “It would mark a serious geopolitical victory for the Russian Federation and a new redistribution of spheres of influence.”

Zelenskyy’s undiplomatic comments reflected Ukrainian concern that the completion of the Nord Stream 2 pipeline bypassing its territory would deprive it of transit fees for pumping the Russian gas to Europe, erode its strategic importance and weaken it politically.

The U.S. has strongly opposed the construction of the new Russian pipeline, but the Biden administration opted Wednesday not to punish the German company overseeing the project while announcing the new sanctions against Russian companies and ships. The Kremlin hailed it as a “positive signal” before a possible Biden’s meeting with Russian President Vladimir Putin.

Russia and Ukraine have been locked in a tense tug-of-war ever since Moscow annexed Ukraine’s Crimean Peninsula in March 2014 following the ouster of the country’s former Kremlin-friendly president and threw its weight behind separatist rebels in Ukraine’s east.

Zelenskyy said that even though U.S. Secretary of State Antony Blinken has assured him during a visit earlier this month that Washington would first consult Kyiv on any Ukraine-related issues before it discusses them with Russia, he is still deeply worried.

“Are there risks that some issues will be raised despite our agreements? he said. ”Yes, I’m sure that there such risks. I’ll be frank with you, I’m scared by this situation.”

A 2015 peace deal brokered by France and Germany helped end large-scale battles, but regular skirmishes have continued along the tense line of contact in the east and political settlement efforts have stalled.

Last month, increasing violations of a cease-fire in the east and a major Russian troop buildup near Ukraine stoked Ukrainian and Western fears of renewed hostilities. Moscow says it has withdrawn its forces after sweeping maneuvers, but Zelenskyy said Thursday that many Russian troops have remained near Ukraine.

The Ukrainian president also said that France and Germany recently have been too soft on Russia.

“I feel their support, but I believe that it should be stronger,” he said. “They are aware of my thoughts, I have been very frank with them. I believe that they have recently weakened their positions a bit.”

The 2015 peace deal signed in Minsk, Belarus, obliged Ukraine to offer broad autonomy to the separatist regions and a sweeping amnesty for the rebels. It also stipulated that Ukraine would regain full control of its border with Russia in the rebel-held territories only after the election of local leaders and legislatures — provisions resented by many Ukrainians as a betrayal of national interests.

Ukraine has pushed for modifying the Minsk agreement to make reclaiming control of the border with Russia in the rebel-controlled regions precede the local elections there, but Russia has firmly rejected Kyiv’s demands.

Ukraine and the West have accused Russia of backing the separatist rebels in the east with troops and weapons, claims Moscow has denied.

Moscow has strongly warned Kyiv that it could intervene to protect civilians in the region if Ukraine tries to solve the conflict by force. Russia has granted citizenship to more than 600,000 people in the rebel-controlled regions.

He said his office has engaged in contacts with the Kremlin on preparing his meeting with Putin.

“A conversation between the Ukrainian presidential office and the Russian Federation has started” to organize the talks, Zelenskyy said, adding that he could meet with the Russian president in a third country.

The Ukrainian leader has previously suggested that he and Putin meet in eastern Ukraine, and Putin invited Zelenskyy to come to Moscow.

In Moscow, Putin’s spokesman Dmitry Peskov confirmed in Thursday’s call with reporters that Russian and Ukrainian officials have had some preliminary discussions about a possible meeting, but added they have remained sketchy. 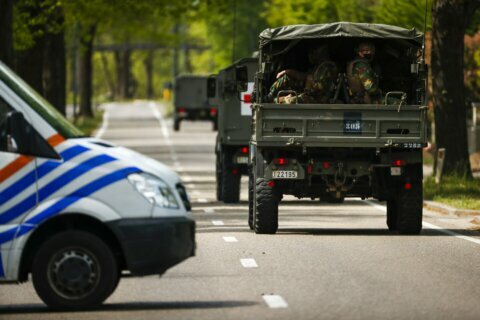