LONDON (AP) — The U.K. has granted full diplomatic status to the European Union’s ambassador to the country, in a reversal of policy that settles one of the disputes that have strained relations between the two sides since Brexit.

In a joint statement Wednesday, British Foreign Secretary Dominic Raab and the EU’s top diplomat, Josep Borrell, said they had reached an agreement that was “based on goodwill and pragmatism.”

Under the so-called Establishment Agreement for the EU Delegation to the U.K., the EU’s ambassador to London will now have a status consistent with those from states around the world. The EU’s staff will also have the same privileges and immunities that other delegations have in the U.K.

The changes bring an end to one of the rows that have soured relations since the U.K. left the EU in early 2020. The U.K. had sought to justify its decision not to grant full diplomatic status to João Vale de Almeida, the bloc’s first ambassador to London, on the grounds the EU is not a state even though other countries give it equivalent credentials.

Many thought the U.K.’s stance was petty and aimed purely at helping Prime Minister Boris Johnson to draw as many concessions as possible from the EU during their post-Brexit discussions last year. Though a trade deal was eventually sealed on Christmas Eve, there are many lingering tensions between the U.K. and the EU, not least over Northern Ireland, which is the only land border between the two.

The change of course came during a discussion between Raab and Borrell on the margins of the Group of Seven meeting of foreign ministers in London.

They also discussed cooperation on foreign and security policy and ways of stepping up joint work on climate change ahead of this year’s United Nations Climate Change Conference in the Scottish city of Glasgow.

They also discussed efforts to kickstart peace talks in Cyprus and stressed the need to build momentum for the next meeting of Greek Cypriots and Turkish Cypriots after their failure last week to make headway in the latest U.N.-sponsored effort on the future of their ethnically divided island.

Follow all AP stories on the Brexit trade talks at https://apnews.com/Brexit 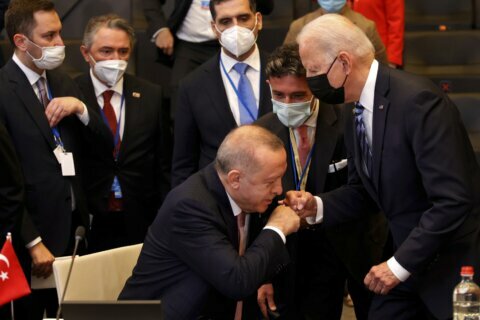