THE HAGUE, Netherlands (AP) — A Dutch court on Wednesday ordered Royal Dutch Shell to cut its carbon emissions by net 45% by 2030 compared to 2019 levels in a landmark case brought by climate activism groups, which hailed the decision as a victory for the planet.

The Hague District Court ruled that the Anglo-Dutch energy giant has a duty of care to reduce emissions and that its current reduction plans were not concrete enough.

The decision could set a precedent for similar cases against polluting multinationals around the world. Activists gathered outside the courtroom erupted into cheers as the decision was read out loud.

“The climate won today,” said Roger Cox, a lawyer for the Dutch arm of Friends of the Earth, which was one of the organizations behind the case.

“This ruling will change the world. Worldwide, people are in the starting blocks to take legal action against oil companies following our example,” Cox added.

The Hague court did not say how Royal Dutch Shell should achieve the ordered cutback, saying the energy giant’s parent company “has complete freedom in how it meets its reduction obligation and in shaping the Shell group’s corporate policy.”

In a written reaction, Shell said it expects to appeal the “disappointing court decision.”

The company said it is already “investing billions of dollars in low-carbon energy, including electric vehicle charging, hydrogen, renewables and biofuels. We want to grow demand for these products and scale up our new energy businesses even more quickly.”

At a hearing in December, Shell lawyer Dennis Horeman said a ruling against the company could create a situation “in which countless parties can hold each other accountable for their role in that (energy) transition through the courts” and give judges “a central role in an active and delicate political process.”

Shell says it has set “an ambition to be a net-zero emissions energy business by 2050, or sooner.”

The court said in an English language summary of its ruling that Shell was not currently in breach of its obligation to reduce emissions, as the environmental groups had argued, because the parent company was tightening its emissions policy.

But it ruled that Shell’s policy “is not concrete, has many caveats and is based on monitoring social developments rather than the company’s own responsibility for achieving a CO2 reduction.”

“Therefore, the court has ordered RDS to reduce the emissions of the Shell group, its suppliers and its customers by net 45%, as compared to 2019 levels, by the end of 2030, through the corporate policy of the Shell group.”

A group of seven environmental and human rights organizations and some 17,000 Dutch citizens filed the case in 2018, calling on the court to order Shell to cut emissions in line with the global goals set out in the Paris climate agreement. That equates to Shell cutting emissions 45% by 2030.

The court ruled on the claims by six of the groups.

The case in the Netherlands is the latest in a string of legal challenges filed around the world by climate activists seeking action to rein in emissions, but it is believed to be the first targeting a multinational company.

One of the first successful climate cases also was in the Netherlands, where the Supreme Court two years ago upheld a 2015 ruling requiring the government to cut emissions at least 25% by the end of 2020 from benchmark 1990 levels.

Donald Pols, director of Friends of the Earth Netherlands, called the ruling in The Hague, “a monumental victory for our planet, for our children and a big leap towards a livable future for everyone.” 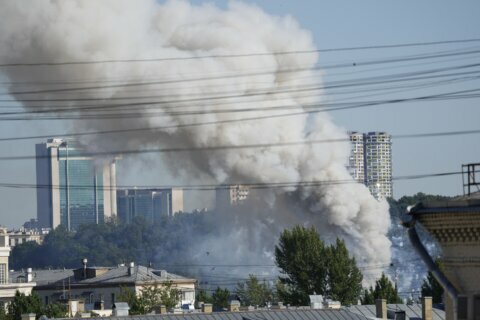