The move comes amid a massive Russian troop buildup near Ukrainian borders and a flareup of cease-fire violations in eastern Ukraine, where Ukrainian forces have been fighting Russia-backed separatists since 2014.

The new law, passed by Ukraine’s parliament in late March, will allow the country to “quickly equip the military units of all state defense forces with reservists, thereby significantly increasing their combat effectiveness during military aggression,” Zelenskyy’s office said in a statement.

Ukrainian Foreign Minister Dmytro Kuleba said Tuesday that the Russian buildup across the border is continuing and is “expected to reach a combined force of over 120,000 troops” in about a week and urged the West to beef up sanctions against Moscow by targeting entire sectors of the Russian economy.

Moscow has rejected Ukrainian and Western concerns about the buildup, arguing that it’s free to deploy its forces and stressing that they don’t threaten anyone. At the same time, the Kremlin has warned Ukrainian authorities against trying to use force to retake control of the rebel east, saying that Russia could be forced to intervene to protect civilians in the region.

Zelenskyy on Tuesday said in a video address that “Ukraine would never start a war, but would always stand until the end” and offered a proposal to Russian President Vladimir Putin to meet in eastern Ukraine to defuse tensions.

Kremlin spokesman Dmitry Peskov on Wednesday said he wasn’t sure Putin had time to look at Zelenskyy’s address. 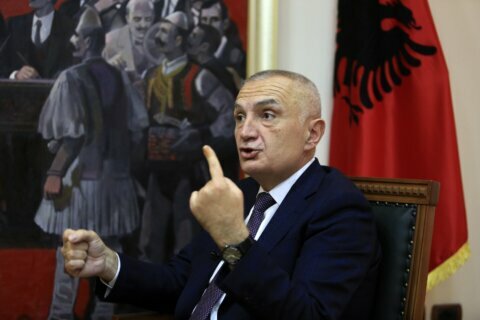