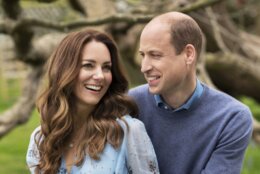 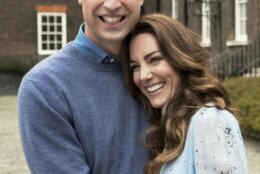 LONDON (AP) — The Duke and Duchess of Cambridge marked their 10th wedding anniversary Thursday by releasing photographs and a video offering an image of domestic bliss — a contrast to the tensions that have gripped Britain’s royal family in recent weeks.

Two photographs show Prince William, second-in-line to the throne, and the former Kate Middleton in complementary shades of blue. A video released later showed the family at play, replete with their smiling children walking near the sea.

William married his former university flatmate on April 29, 2011, at Westminster Abbey in a ceremony televised globally. They have three children: Prince George, 7, Princess Charlotte, 5, and Prince Louis, 3. The traditional gift for a 10th wedding anniversary is tin, a symbol of durability.

“Thank you to everyone for the kind messages on our wedding anniversary,” the couple said on their Twitter feed. “We are enormously grateful for the 10 years of support we have received in our lives as a family.”

The celebration comes 12 days after the funeral of Prince Philip, William’s grandfather, who died April 9 at the age of 99.

Last month, the family was rocked by an interview in which Prince Harry and his wife, Meghan, alleged that palace staff had been insensitive toward Meghan and a member of the royal family had made racist comments about the couple’s first child. Harry, William’s younger brother, stepped away from royal duties last year and moved to California with his wife and son.