In a televised address, Erdogan pledged among other measures to speed up trial proceedings, improve press freedoms and freedom of expression, grant minorities the right to take paid leave during non-Muslim holidays, curb violence against women and ensure that law-enforcement officials are trained in observing human rights.

Erdogan cited hundreds of measures which he said would be implemented in the next two years, adding that his government’s ultimate goal would be to draft a new constitution. Opponents have voiced fears the new constitution would be geared toward cementing Erdogan’s powers.

Turkey has witnessed a deterioration of rights and freedoms under Erdogan’s nearly two decades in power, with human rights groups saying rights to a fair trial, peaceful assembly and free speech have been seriously eroded. Thousands of government critics, including journalists, politicians and activists have been jailed or face prosecution on what they say are trumped-up charges.

“The stuff that was positive was really marginal,” said Howard Eissenstat, an expert on Turkish affairs at St Lawrence University, in New York. “This is about addressing criticism and and cementing power.”

The proposed reforms come at a time when Turkey, with an eye to attracting foreign investments to offset the effects of an economic decline, has been trying to mend ties with its former western partners, including the United States and the European Union.

The new U.S. administration under President Joe Biden has been an outspoken critic of Turkey’s human rights record, calling for example for the release of prominent rights activist and philanthropist Osman Kavala, who has been held in pretrial detention since November 2017.

Turkey also faces possible EU sanctions due to its energy search efforts in the eastern Mediterranean in waters contested by EU members Greece and Cyprus.

Critics say some proof Turkey’s sincerity would be the release of Kavala and of Selahattin Demirtas, the former co-chair of the pro-Kurdish People’s Democratic Party, or HDP. Demirtas, who ran against Erdogan in elections for president, has been in jail since his arrest in November 2016 on terror charges.

Last year, Erdogan accused the European Court of Human Rights of “defending a terrorist” after it ruled for Demirtas’ immediate release.

Turkey has also ignored a 2019 European Court of Human Rights ruling for the release of Kavala, who is accused of links to a failed 2016 coup, as well as anti-government protests in 2013.

Erdogan is scheduled to announce a series of economic reforms next week. 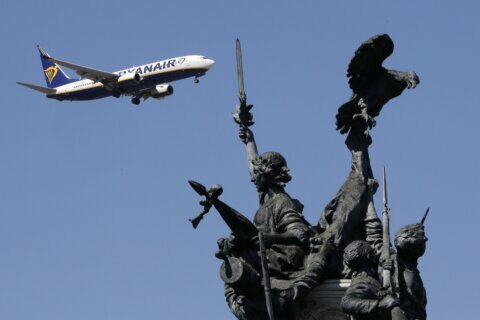