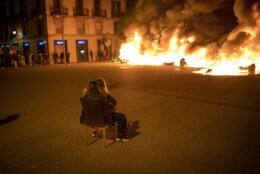 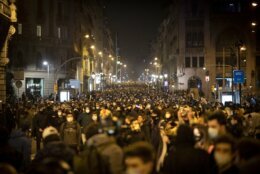 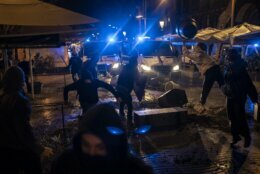 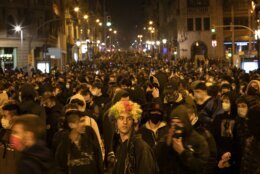 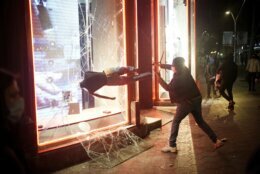 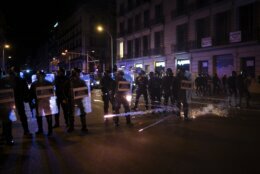 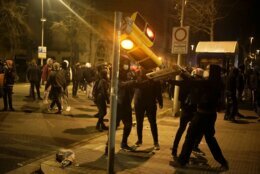 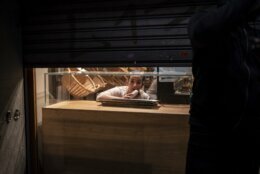 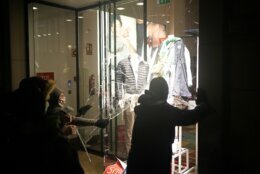 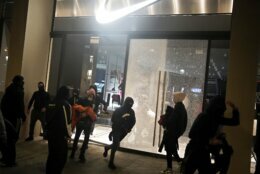 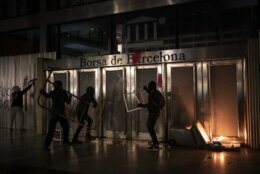 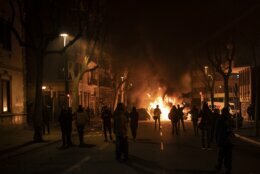 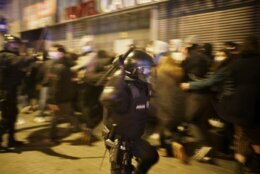 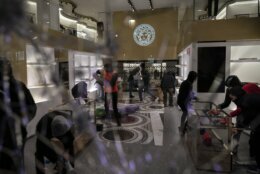 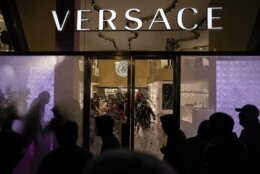 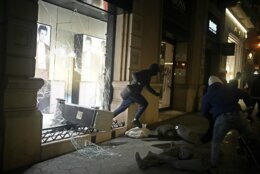 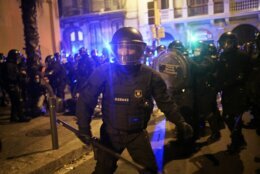 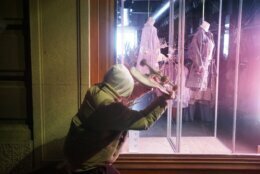 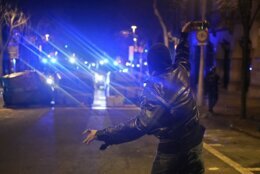 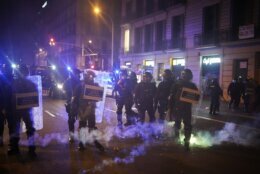 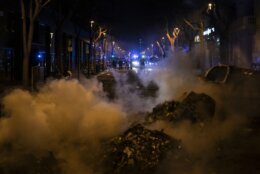 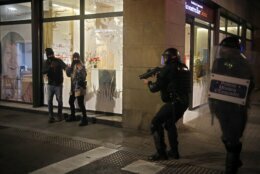 BARCELONA, Spain (AP) — A fifth night of peaceful protests to denounce the imprisonment of a Spanish rap artist once more devolved into clashes between police and the members of fringe groups who set up street barricades and smashed storefront windows Saturday night in downtown Barcelona.

Small groups made up mostly of young people began their nightly cat-and-mouse game with officers an hour after several thousand protesters gathered in the capital of Spain’s Catalonia region, which also was where the worst violence took place during earlier demonstrations this week over rapper Pablo Hasél’s detention.

Police were also pelted by rocks after a march in the Catalan town of Lleida, where Hasél spent 24 hours barricaded a university building before police took him away to serve a 9-month prison sentence for insulting the Spanish monarchy and praising terrorist violence in his music.

Catalonia’s regional police force said there also was defiance in the city of Tarragona, where groups threw glass bottles at police lines and smashed store windows.

Police reported at least 11 arrests from Saturday, including three minors. The worst of the rioting occurred on Barcelona’s Passeig de Gràcia, the city’s most most fashionable shopping boulevard home to art-deco apartment buildings considered architectural treasures.

The mob worked its way up the street, smashing store front windows, toppling motorbikes, and mounting barricades with metal street barriers and burning trash containers to slow the police pursuit. Some even took the fight to police lines, forcing officers to use shields to protect them from hurled rocks. Police said that they had identified one “youth” for targeting a police helicopter with a laser for two hours.

After pouring out of armored vans, police wielded batons and fired foam bullets to disperse the groups.

The disorder appears have come a fringe group of mainly younger people who constituted a small share of the thousands of participants who joined in marches to support Hasél and to oppose the Spanish laws used to prosecute him.

Around 90 people have been arrested and more than 100 people injured since Hasél’s arrest on Tuesday.

Barcelona Mayor Ada Colau made an appeal for calm.

“Defending the freedom of expression doesn’t justify in any case the destruction of property, frightening our fellow citizens, and hurting businesses already hurt by the crisis” caused by the pandemic, the mayor said.

Marches were called for cities across Spain. Most were peaceful, but Pamplona in the central north saw clashes between police and people throwing bottles.

Madrid municipal authorities said that 300 National Police officers were called up to assist city police, but a protest of several hundred people concluded in the Spanish capital without any splintering off of troublemakers.

Spain’s left-wing government announced last week before Hasél was detained that it would change the law to remove prison terms for offenses involving freedom of expression. It did not specifically mention the rap artist or set a timetable for the changes, and its pledge appears to have done little to release the social tension that has boiled over.