Holidays: 'Enchant' shines with millions of lights in Nats Park | Where to see holiday lights | Send in photos of decorations | How to give greener this season
Home » Entertainment News » New this week: 'Halloween…

— Is it really time to say goodbye to Jamie Lee Curtis’ Laurie Strode? That’s the idea behind “Halloween Ends,” which promises some kind of conclusion to the Michael Myers saga, which has been going on now for 45 years, and as the promos tease “only one of them will survive.” Director David Gordon Green returns to close his modern trilogy, which will be released in theaters and on Peacock on Friday. The last film, “Halloween Kills,” ended on a cliffhanger with a mob rising up to hunt down Michael Myers. Green said in an interview recently that, “Any frustration that was expressed about the last one, I kind of just smile and say, ‘Hold tight, here we come.’”

— ”Booksmart” star Kaitlyn Dever lends her comedic skills to “Rosaline,” a cheeky twist on the “Romeo and Juliet” story focused on Romeo’s briefly mentioned ex. Dever plays the title character who has just discovered that her love (Kyle Allen) has become interested in someone else, Juliet (Isabela Merced), and she takes it upon herself to try to sabotage the new relationship. Coming to Hulu on Friday, “Rosaline” is based on a young adult novel by Rebecca Serle, adapted for the screen by “(500) Days of Summer” scribes Scott Neustadter and Michael H. Weber and directed by Karen Maine (“Obvious Child”). Minnie Driver and Bradley Whitford co-star. It could make a thematically appropriate double feature with Lena Dunham’s “Catherine Called Birdy,”over on Prime Video.

— On video on demand, you can also check out “Piggy,” a horror that got good buzz out of the Sundance Film Festival early this year. The film stars Laura Galán as a teenage girl who is overweight and bullied by the locals in the Spanish countryside where she spends her summers. But things take a turn when she finds that her tormenters have been kidnapped and she has to figure out what to do about it. It’s the feature debut of Carlota Pereda, who wrote the script, and whose work on the film drew comparisons to Brian De Palma and “Carrie.”

— With “Being Funny In a Foreign Language,” The 1975 continue their tradition of long and cryptic album titles. The only clues about the direction of their latest, 11-track collection is some of its singles — the funky “Happiness,” the sweet, uncynical throwback “I’m In Love With You” and the ambitious, totally cynical and progressive “Part of the Band,” with singer Matty Healy’s memorable lyrics: “Am I ironically woke? The butt of my joke? Or I am just some post-coke, average, skinny bloke calling his ego imagination?” So where does that seem to lead? So far, just good music. ( Read AP’s review.)

— Red Hot Chili Peppers aren’t ready to stop spicing up our lives this year. Their album “Return of the Dream Canteen,” comes out Friday, their second album release of 2022, following “Unlimited Love” from April. Once again, they’ve joined forces with longtime producer and creative confidant Rick Rubin, with an early single being “Tippa My Tongue.” In between albums, the band won the prestigious Global Icon Award and performed at the MTV Video Music Awards. The band says the new album ”is everything we are and ever dreamed of being. It’s packed. Made with the blood of our hearts.”

— If you’re feeling down, who is there? Exactly. We mean dance diva Betty Who. It’s virtually impossible to be down after listening to her 14-track “BIG!” — brimming with self-love and acceptance. “I won’t apologize for taking up space/I’m not gonna fight it/I belong out of place,” she sings on the title track. The project’s debut single, “Blow Out My Candle,” is pure empowerment pop and “She Can Dance” sees Betty looking back to an earlier, less conscious self: “Second choice and second best/Couldn’t say the things she meant/Or find the missing pieces that were broke/But she could dance.”

— Global trailblazer and provocateur M.I.A. is back and you better make room. “Beep, beep! Yeah, I’m tryna come through,” she sings on the hypnotic “Beep” from the new album, “Meta.” Other singles include “The One” and “Popular,” where M.I.A.’s sarcastic view of fame is hard to hide: “Suddenly it’s about me, ’bout me/ Now you wanna be around me, ’round me.” The follow-up to 2016’s “Aim,” “Mata” is years in the making, its compositions recorded in London, Los Angeles, Italy, Bali, Jakarta and St Vincent.

— “Supernatural,” which ended its 15-year-run in 2020, begat a comic book series, novels and, finally, a spin-off about brothers Sam and Dean Winchester’s parents. Dean (Jensen Ackles) serves as narrator for “The Winchesters,” which traces the love story of John Winchester (Drake Rodger) and Mary Campbell (Meg Donnelly) in the 1970s. He’s a newly returned Vietnam War veteran, she’s fighting her own battles as a demon hunter, and they are intent on uncovering secrets kept by both their families. The series debuts Tuesday on the CW.

— “High School,” the 2019 memoir by indie pop duo and twins Tegan and Sara Quin, has been adapted for an eponymously named series set in 1990s Canada. TikTok creators Railey and Seazynn Gilliland, also twins, play the teenage versions of, respectively, Tegan and Sara, in the coming-of-age story flavored by the era of grunge. Cobie Smulders and Kyle Bornheimer guest star as the twins’ parents in “High School,” which debuts Friday on the Amazon Freevee streaming service.

— “Shantaram” is another book-based series, this time the novel of the same name by Gregory David Roberts. In vividly depicted 1980s Bombay, India, fugitive Lin Ford (Charlie Hunnam) is trying to disappear into a new life but finds that old patterns and love are getting in the way. It’s a grueling journey for Lin, as it was in the novel that Roberts has said incorporates elements of his own life, including drugs, prison and an unlikely role as healer. The Apple TV+ series debuts with three episodes on Friday, with the remaining nine episodes released weekly. 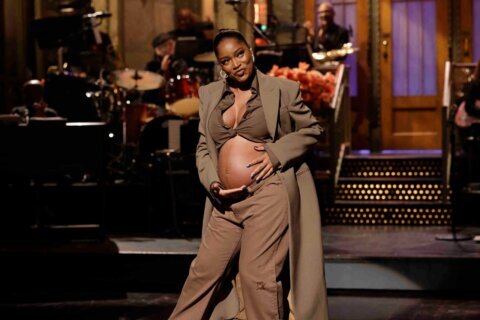