“Come on out, come play with us,” Lead Actor Amari Cheatom told WTOP. “We’re on stage in all this costume and makeup and having a good time. We’re learning and hopefully you come out and learn too. Come get your life changed, come get your perspective shifted.”

The groundbreaking casting at London’s Covent Garden happened at the same time that a bill was making its way through Parliament to abolish slavery in the British colonies.

“The Jamaican Colony is up in arms and rebelling — their stake in sugar is high at the time — but [Britain] is also trying to abolish [slavery], so there’s lots of tension around whether we should keep slavery in the colony or abolish it,” Cheatom said.

The London theater audience welcomes Aldridge, but the producers do not.

“The audience accepts it,” Cheatom said. “There’s this roaring applause after Ira performs, but it was the Powers That Be that were against it and shut the theater down, shut the play down, shut the production down and essentially pushed Ira out of London, basically that day’s version of being black-balled. He had to go on a tour of Eastern Europe after that.”

Exiled from the London theater scene, Aldrige made history across the continent.

“That’s really when he established his legacy,” Cheatom said. “He performed in places that had never heard of Shakespeare and had never seen it performed. Being a Black actor doing Othello, and doing it in a pure sense, he was exposing that part of the world to Shakespeare in a way that they hadn’t received before.”

“The references that Ira makes to ‘red velvet’ are memories from a kid watching theater,” Cheatom said. “When the curtains are closed waiting for a performance to start, there’s the expectation and anticipation of what’s going to happen when those curtains open. He says that the expectation of greatness, the thrill of that is how he fell in love with the theater.”

Beyond the stage, what did he learn about Aldridge as a human being?

He admires playwright Lolita Chakrabarti, who earned an Olivier Award nomination for “Red Velvet” in 2013 before winning the prize for her adaptation of “Life of Pi” in 2022.

“The way she writes dialogue in some moments mirrors the way that we talk and the way our minds can jump from thought to thought, seemingly randomly, but we’re trying to express a greater idea,” Cheatom said. “Finding the greater idea and grasping onto that is how you piece those thoughts and words together that she’s written.”

“Jade comes with a lightness that has brought a bright tint to everything, even though we’re dealing with heavy subject matter,” Cheatom said. “It’s a gorgeous set. The stage is on a huge table that turns, a circle that’s cut out and it turns, so you see the three different sets: a green room, the stage and a dressing room. … The costumes are amazing.”

Not only has Cheatom worked with elite theater directors, but he’s also learned from the best film directors, including Quentin Tarantino on “Django Unchained” (2012).

“Sometimes you have to do things outside of the norm, out of the box or a bit extreme, people might even say you’re crazy … but if you get it done and you treat people well, people will accept the outlandish things and want to follow you,” Cheatom said. “Jamie Foxx is so down to earth but so extremely talented, it’s hard to believe both can exist.”

“Denzel was super generous,” Cheatom said. “When I’m on camera doing my tiny role, the way he supported me so I could do my job the best I could, he was off camera behind me giving 110% even though the camera wasn’t on him. … Denzel stuck around and went above and beyond. It was one of the most gracious acts that I’ve experienced.”

He also worked with Lakeith Stanfield in the Sundance gem “Crown Heights” (2017).

“Lakeith is a man of the people,” Cheatom said. “There’s something about him that you can tell he’s not as jovial about being in large groups of people, but he still understands the power of captivating people in his immediate surroundings, so the way he kept things light on set, I took note of that and people love him for it — and he does phenomenal work.”

More recently, he joined Daniel Kaluuya in “Judas and the Black Messiah” (2021).

“The amount of focus he had is incredible,” Cheatom said. “This film set had a lot of young energy on set and he had a lot of heavy lifting to do, so when those young guys were around him making a lot of noise … he’d participate with them, but when it was time to go, time to shoot, he was able to ground himself. … I thought that was an admirable trait.”

Review: ‘The Sea Beast’ is a charming, animated adventure 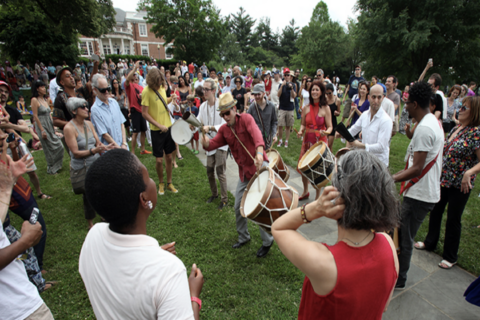