The National Philharmonic and Washington Chorus collaborate on the world premiere of "A Knee on the Neck" at Strathmore on Saturday and Capital One Hall next Monday.
Listen now to WTOP News WTOP.com | Alexa | Google Home | WTOP App | 103.5 FM
download audio
WTOP's Jason Fraley previews 'A Knee on the Neck' (Part 1)

Nearly two years ago, the murder of George Floyd sparked a racial reckoning in America.

Now, the National Philharmonic and Washington Chorus collaborate on the world premiere of “A Knee on the Neck” at Strathmore on Saturday and Capital One Hall next Monday.

“It’s multiple poems for George Floyd and others,” National Philharmonic Music Director and Conductor Piotr Gajewski told WTOP. “There are three names that are called out in the text: Breonna Taylor, Emmett Till and George Floyd, but obviously the list of names is long. … George Floyd’s final words are quoted, ‘I can’t breathe,’ his cries for his mother.”

Adolphus Hailstork composed the music around the poetry of Herbert Martin.

“This is an oratorio, so we have a chorus on stage, an orchestra and three soloists,” Gajewski said. “We sing our way through these poems. … The poems are very poignant, some are very practical, almost vernacular, an everyday Black mother’s advice to her children: ‘Watch yourself when you go out because there’s a problem you might face.'”

Three choruses will collaborate, including the National Philharmonic Chorale, The Washington Chorus and members of the Howard University Choral Department.

“You’re talking about a chorus of about 150, so a huge chorus above the stage with an orchestra of about 70 on stage and then three or four soloists up front — and me with my heart in my throat trying to make sure that it all is together,” Gajewski said.

It’s been quite the challenge for the triple chorus to tackle Hailstork’s work.

After an intermission, the program will conclude with Mozart’s “Requiem in D Minor.”

“[It’s a piece] we’ve done many, many times before … but in this case, it’s put in the service of the remembrance of the many unjust killings that have taken place,” Gajewski said. “It’s an important work. It puts us in the frame of reference of what’s going on in this country in terms of social justice and how far we still have to go.”

The goal is to let audiences live vicariously through a Black perspective.

“[We] try to allow individuals to enter into the space of an African American’s journey,” Rogers said. “Can you see the world just for a moment through the eyes of an African American? … Even though that journey may not be your own, we can sing a song together. …  We together [must] join hands and see ourselves in someone else’s struggle.”

It’s also a personalized remembrance of the actual lives lost.

“Also to remember those specific individuals,” Rogers said. “Yes, we’re dealing with a bigger issue, but also we’re not talking about characters, we’re talking about family members, children. … To specifically remember these people’s lives is important.”

Floyd’s murder might have been a wake-up call, but much work remains.

“There may have been a reckoning, but I don’t think we’ve found the way forward yet,” Gajewski said. “The piece does leave you with hope — ‘together we shall abide,’ a quote from the final hymn  — but we need pieces like this to bring back, two years later, as a reminder that we haven’t found the way forward yet. It’s in essence a ‘never forget.'” 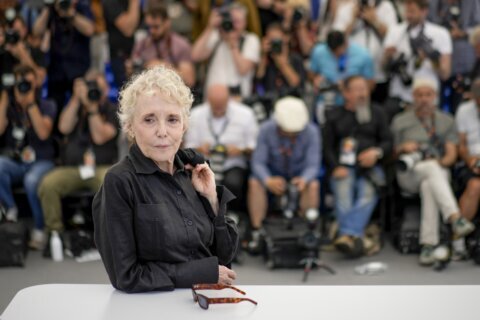