Jason Statham says very, very little in his new film. The English actor must have only need to memorize about three pages of dialogue. But, as always, he’s very expressive with his hands. And the guns in them.

“You ain’t much for talking, are you, Mary Poppins?” he is asked in a locker room taunt. What’s your guess that whoever said that is going to survive this movie?

Steely Statham reunites with director-writer Guy Ritchie for a stylish revenge-heist mashup “Wrath of Man,” building on a partnership that has previously produced “Lock, Stock and Two Smoking Barrels,” “Snatch” and “Revolver.”

Both men are in their ideal element in “Wrath of Man” — Statham on a cool and consistent murder spree of bad guys and Ritchie capturing it all with his kinetic filmmaking style and restless camera.

Loosely based on the 2004 French film “Cash Truck,” the story starts with the messy, bloody assault on a Los Angeles armored truck hauling money and thrillingly returns again and again to this key moment.

Statham is hired as a guard in the aftermath of the attack and soon shines at Fortico Security, mainly because he is so deadly that he kills would-be thieves — including a moonlighting Post Malone — without ever crouching or dodging. He just walks straight toward them, pumping bullets and never misses. Someone calls him “unambiguously precise.”

It turns out that this guy is not the overqualified security officer we thought. He’s undercover on a mission to avenge his son’s death. “I do bear a grudge,” he admits in one of the few moments he speaks. (A co-worker has a more extreme observation: “I’m starting to think he’s a psychopath.”)

The screenplay — co-written by Ritchie, Ivan Atkinson and Marn Davies — leans on a classic Ritchie trick of scrambling time by jumping ahead and then back. That adds a little faux-European chic to what is pretty much a predictable Yankee formula.

Viewers are given helpful title cards — like “Five Months Later” and “Five Months Earlier” — but they often seem to conflict with each other and also step on the extensive very-Ritchie chapter titles (“Bad Animals, Bad” and “Liver, Lungs, Spleen & Heart”).

Ritchie’s love of colorful nicknames is also again evident — look for guys named “Boy Sweat Dave” and “Bullet” — and his ultra-violence set to discordant music has not dimmed: Listen to “Folsom Prison Blues” while a man is being beaten with his head in a plastic bag.

“Wrath of Man” finds Ritchie in a moody midlife mood, his urge to be quirkily unpredictable now contained, even as his camera still swings around, going backward, ahead or soaring above. There is menace, a dull darkness and stillness, as if he’s watched “Heat” too many times.

The film starts to leak momentum — like drops of blood from a body pumped with bullets — until we are introduced to a new armed robbery crew led by “Burn Notice” star Jeffrey Donovan. Perfect for a heist flick, he virtually swipes the film from under Statham’s glare.

Donovan’s crew is made up of disgruntled U.S. military men whose return to civilian life hasn’t gone smoothly, so they turn to crime. “It’s a lot more profitable than killing Arabs,” one says helpfully.

These military guys make good criminals since they adore recon and planning. They have their sights on a big heist at Fortico Security but their bravado is undercut when their crime-scene diorama uses toy cars with hand-lettered labels reading “SWAT.” Also their choice of silver Prius as their getaway ride is welcome news to the small community of both criminally inclined but environmentally conscious.

A showdown between Donovan and Statham is in the cards, though Statham is warned by the opposing robbers that, “Today is not the day to be a hero.” Alas, it’s in his DNA. He IS going to be the hero today, despite what seems like a deflating ending and a lot of spent casings. But he’s a hero with few words.

“Wrath of Man,” an MGM release, is rated R for strong violence throughout, pervasive language and some sexual references. Running time: 119 minutes and in theaters Friday. Two and a half stars out of four. 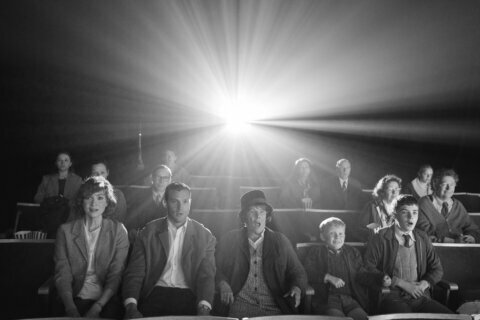