NEW YORK (AP) — Lawrence Block has followed many paths during his long career.

“With not a few dead end roads among them,” notes the mystery novelist.

Best known for his Matthew Scudder and Bernie Rhodenbarr series, Block has released dozens of popular works through Harper Collins and Dutton among other mainstream publishers. He has received multiple Edgar Awards and Anthony Awards for outstanding fiction, and his lifetime achievement honors include the Diamond Dagger from the British Crime Writers’ Association and Grand Master status in the Mystery Writers of America.

But he has also completed dozens of works under other names, by publishers and publications long since forgotten, and, in some cases, of questionable legality. More recently, he has been publishing the books himself, including “Dead Girl Blues” and the Rhodenbarr novel “The Burglar In Short Order,” which both came out in 2020, and his current work, the memoir “A Writer Prepares.”

“One big plus of self-publishing is how quickly it can be managed. I can reduce waiting time by a minimum of a year if I publish something myself,” he explains.

“The downside is not to be shrugged off. Self-published books rarely get reviewed and hardly ever show up in bookstores. ‘Dead Girl Blues’ didn’t make me rich, and neither will ‘A Writer Prepares.’ But nothing I write is going to do that, no matter who publishes it, and whatever I self-publish stays forever available in electronic and print editions, and probably finds whatever audience it deserves to have.”

Block is a longtime Greenwich Village resident, fully vaccinated and back outside, enjoying a nice big plate of Brussels sprouts during a recent afternoon interview at a favorite cafe. Passersby and fellow diners do not seem to notice anything special about this bald, plainly dressed man with the graveled voice, though at least some likely know about his books.

“A Writer Prepares” is a bit of unfinished business for Block, who turns 83 this summer and first worked on the memoir in the 1990s, during “a positively feverish week” at an Illinois artist retreat. But he had other projects at the time and left the memoir in a manila envelope in a closet near his desk. When he came upon the manuscript last year, he gave it another look and was pleased by what he saw.

In “A Writer Prepares,” Block looks back to his childhood in Buffalo, New York, when he was his own biggest skeptic. In 11th grade English, he was assigned a paper on what his future profession might be. His theme was “uncertainty,” he recalled. He confided that he would never fulfill his father’s dream for him to become a doctor, and that an early wish to be a garbage man ended when his mother told him the work would chap his hands.

He ended the piece with a disclaimer: “On reading over this composition, one thing becomes clear. I can never be a writer.”

Responded his teacher, Miss Jepsen, who gave him an A: “I wouldn’t be too sure of that.”

Block attended Antioch College, the setting for his extra-pulpy novel “Campus Tramp,” but never graduated and eventually settled in New York. Ambitious and prolific, he would take on the kind of assignments not generally discussed at the University of Iowa Writers’ Workshop or offered by the Paris Review.

Before “Lawrence Block” became a publishing brand, he was introduced to readers as Anne Campbell Clark, or Chip Harrison, or Jill Emerson, or Sheldon Lord. He wrote erotica and lesbian novels, called himself Dr. Benjamin Morse as he completed “Sexual Surrender in Women,” and, as, John Warren Wells, turned out a bit of field research titled “Tricks of the Trade: A Hooker’s Handbook.” He wrote for magazines that would cut his stories, change the title or rename a character. He might submit a story under one pen name and discover it was changed to another.

“A Writer Prepares” captures a pre-Internet, pre-superstore business that included such publications as Manhunt, Trapped and Keyhole, and some institutions that only the most cynical writer would have imagined on his own. Block worked briefly as a copy reader for the Scott Meredith Literary Agency, whose founder was as elusive as the ethics of his company.

“Every letter we wrote was designed to manipulate, and was dashed off with a cavalier disregard for the truth,” Block writes. “My fee reports applauded the talent of writers who showed no talent, condemned the plots of stories with perfectly satisfactory plots, and were written with the singular goal of getting the poor mooch to submit another story and pony up another fee.”

When Meredith died, Block recalls during his interview, fellow author Evan Hunter called up friends and exclaimed, “Isn’t that wonderful, Scott’s dead?! Isn’t that the best thing you’ve ever heard?!”

Block’s memoir captures New York in the late 1950s-early 1960s, when it was both stimulating and affordable, enabling a young writer to start a family there. The city has long been part of his work. Some readers think of “Eight Million Ways to Die,” perhaps his most famous Scudder novel, as one of the great books about New York. Matthew Scudder lives in downtown Manhattan, but his cases bring him all around the city, to homes honest citizens would be advised not to visit.

“I like to get around the city,” Block says. “Up until the pandemic, my wife and I would have a thing: On Sundays, we’d research a little and we’d find some ethnic restaurant in some outer-borough neighborhood we had no acquaintance with and figure out how to get there. It was a great once-a-week treat.”

His memoir leads to the mid-1960s, to what he calls the end of his “apprenticeship,” the publication of his novel “The Thief Who Couldn’t Sleep.” It was the start of his breakthrough Evan Tanner mystery series, about a Korean War veteran who because of his injuries is afflicted with permanent insomnia. Block calls it the first book only he could have written, a break from the “derivative work” of his early years and the start of the kinds of novels he knew he was meant to write.

“The stakes are higher (in a mystery novel) than they are in a novel where the big plot point is, ‘Will this professor gets tenure?’” he says with a smile.

He cites a writer friend who’s “a heavy-duty reader. And she’s got a book that she’s reading and she always reads herself to sleep at night. And for ages the book she settles in bed with has to be a mystery because at that point in the day, she says, she has to be reading something that she knows will be resolved at the end — which I found interesting.” 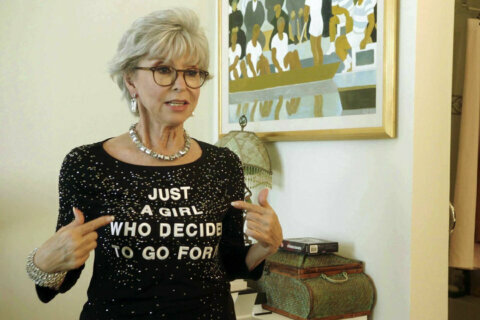