It's your last chance to see one of the most iconic artists of all time, who combined poetic lyrics, dazzling piano skills, flamboyant showmanship and an angelic voice like few others. Here is a look back at the career of Elton John, as his farewell tour hits D.C. this weekend.
Listen now to WTOP News WTOP.com | Alexa | Google Home | WTOP App | 103.5 FM
(1/7) 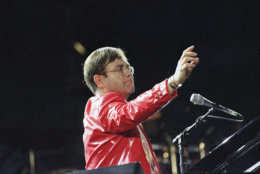 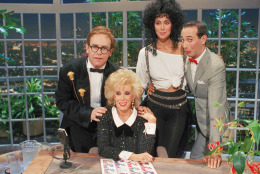 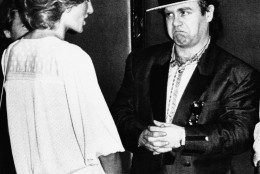 WASHINGTON — Too often, pop culture celebrates our musicians in their prime, then takes them for granted until giant tributes upon their deaths: David Bowie to Tom Petty to Prince.

But it’s equally important to cherish our living legends while they’re still rocking the house, which brings us to Sir Elton John’s farewell tour at Capital One Arena on Friday and Saturday.

It’s your last chance to see one of the most iconic artists of all time, who combined poetic lyrics, dazzling piano skills, flamboyant showmanship and an angelic voice like few others.

To this day, he remains the No. 8 top-selling artist ever, behind only The Beatles, Garth Brooks, Elvis Presley, The Eagles, Led Zeppelin, Michael Jackson and Billy Joel. According to the Recording Industry Association of America, he has outsold Pink Floyd, AC/DC, George Strait, Barbra Streisand, The Rolling Stones, Aerosmith, Bruce Springsteen and Madonna.

How did such a body of work come to be?

Born in Middlesex, England, in 1947, John released his debut album “Empty Sky” in 1969, launching a lifelong collaboration with lyricist Bernie Taupin. But it was his self-titled follow-up “Elton John” (1970) that proved to be his breakthrough, including the hit single “Your Song,” cleverly chronicling a songwriter’s battle with writer’s block to pen the perfect love song: “Anyway, the thing is, what I really mean, yours are the sweetest eyes I’ve ever seen.”

His third album “Tumbleweed Connection” (1970) brought “Amoreena,” which was used by Sidney Lumet for the soundtrack of “Dog Day Afternoon” starring Al Pacino: “Lately, I’ve been thinking, how much I miss my lady, Amoreena’s in the cornfield, brightening the daybreak.”

His next album “Madman Across the Water” (1971) showed his range with “Levon” and “Tiny Dancer,” which eventually became one of his most famous tunes: “Ballerina, you must have seen her, dancing in the sand, And now she’s in me, always with me, tiny dancer in my hand.”

His next album “Honky Château” (1972) reached the stratosphere with “Rocket Man,” arriving three years after NASA’s moon landing with subversive symbolism: “Mars ain’t the kind of place to raise your kids, In fact it’s cold as hell, And there’s no one there to raise them if you did.”

The album also included “Mona Lisas and Mad Hatters” filled with social commentary: “Sons of bankers, sons of lawyers, Turn around and say good morning to the night, For unless they see the sky, But they can’t and that is why, They know not if it’s dark outside or light.”

His sixth album “Don’t Shoot Me I’m Only the Piano Player” (1973) brought another monster hit with “Crocodile Rock,” providing upbeat nostalgia to early rock ‘n roll: “While the other kids were Rocking Round the Clock, We were hopping and bopping to the Crocodile Rock.”

His lucky number seventh album “Goodbye Yellow Brick Road” (1973) was his best, featuring a killer title track that turned a “Wizard of Oz” reference into a wailing tale of hopes, dreams and wisdom: “Oh I’ve finally decided my future lies, Beyond the yellow brick road.”

Equally melancholic was the same album’s “Candle in the Wind,” his touching tribute to the late Marilyn Monroe: “Goodbye Norma Jean, From the young man in the twenty second row, Who sees you as something more than sexual, More than just our Marilyn Monroe.”

It also spawned an up-tempo rocker with “Saturday Night’s Alright for Fighting,” featuring a ripping guitar and end-of-the-week refrain: “Oh, don’t give us none of your aggravation, We had it with your discipline, Oh, Saturday night’s all right for fighting, Get a little action in.”

Still, the album’s most iconic tune remains the unrivaled “Bennie and the Jets,” playing like a cabaret jazz ditty with a live crowd noise, scatting chorus and playful falsetto: “She’s got electric boots, a mohair suit, You know I read it in a magazine, B-B-B-Bennie and the Jets.”

His next album “Caribou” (1974) opened with the catchy single “The Bitch is Back,” followed by a pleading ballad for the ages with “Don’t Let the Sun Go Down on Me,” which he later revived as a duet with George Michael: “I took a chance and changed your way of life, But you misread my meaning when I met you, Closed the door and left me blinded by the light.”

After that, the album “Captain Fantastic and the Brown Dirt Cowboy” (1975) featured “Someone Saved My Life Tonight” and a “Philadelphia Freedom” reissue: “Cause I live and breathe this Philadelphia freedom, From the day that I was born I’ve waved the flag, Philadelphia freedom took me knee high to a man, yeah, Gave me a piece of mind my daddy never had.”

In 1990, he penned “Measure of a Man” for the “Rocky V” soundtrack: “This is where you’ve always been, you had to lose so you could win, and rise above your troubles while you can.”

He continued to reinvent himself for a new generation in the ’90s with such modern hits as “The One” (1992), cracking the U.S. Top 10 with straight-up romance: “When stars collide like you and I, No shadows block the sun, You’re all I’ve ever needed, Baby you’re the one.”

He reached children’s immortality with Tim Rice on the “The Lion King” (1994), winning the Oscar for “Can You Feel the Love Tonight?” for Best Original Song: “Can you feel the love tonight? How it’s laid to rest, It’s enough to make kings and vagabonds believe the very best.”

The film also earned Oscar nominations for his songs “Hakuna Matata” and “The Circle of Life,” which also became a radio hit with different lyrics: “In the circle of life, it’s the wheel of fortune, it’s the leap of faith, it’s the band of hope, Till we find our place, On the path unwinding.”

With his renewed success, his prolific career was reborn with “Blessed” (1995), a tear-jerking tale of a parent singing his wishes to an unborn child: “Hey you, you’re a child in my head, You haven’t walked yet, Your first words have yet to be said, But I swear you’ll be blessed.”

When tragedy struck in the death of Princess Diana in 1997, Sir Elton rewrote “Candle in the Wind,” changing “Goodbye Norma Jean” to “Goodbye England’s Rose” and bringing the world to tears by performing a rendition at her funeral: “And your footsteps will always fall here along England’s greenest hills, your candle burned out long before, your legend ever will.”

You could say the same for Elton’s farewell tour, his candle finally burning out before his legend ever will. For us fans, we never knew us a better time and I guess we never will.

EDITOR’S NOTE: Each concert begins promptly at 8 p.m., so aim to be in your seats on time.

Michael Cohen book on Trump to be published Sept 8 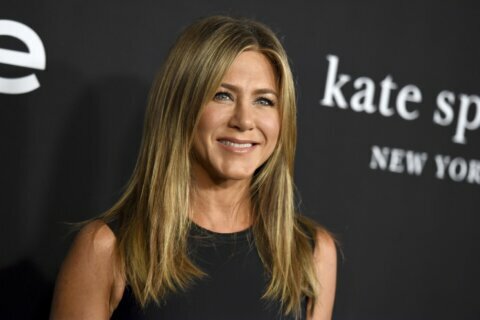 Spicoli to the rescue with ‘Fast Times’ virtual benefit