WASHINGTON — The Cars will be inducted into the Rock & Roll Hall of Fame in April to honor the band’s undeniable role in defining the “new wave” genre of the late ’70s and early ’80s.

But first, the group’s hit songwriter is bringing his new abstract art exhibit to the D.C. area.

Ric Ocasek will hold a free exhibit and fan meet-and-greet at the Wentworth Galleries on Friday at Westfield Montgomery Mall and Saturday in Tysons Galleria, both from 7 to 9 p.m.

“I’ve been doing it for quite a long time,” Ocasek said. “But I never really showed it until now.”

While Ocasek occasionally dabbles with acrylics on canvas, Pop Art photographs and mixed-media paintings, his primary medium is drawing on paper, usually with colored markers. 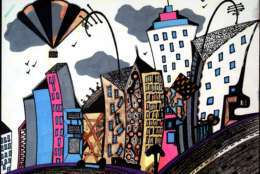 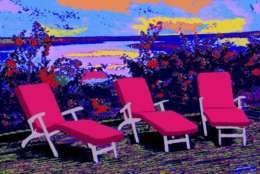 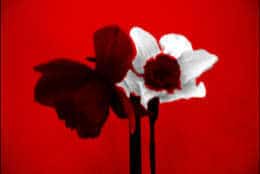 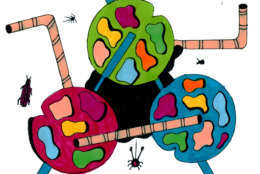 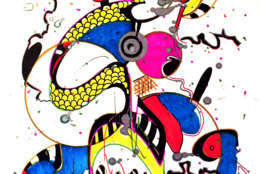 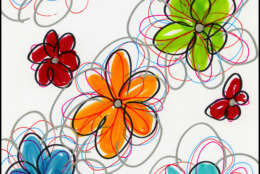 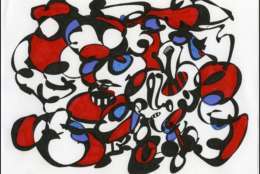 “It’s easy to carry around books with you, so having things that are portable [is key],” Ocasek said. “Often times, I’ll blow things up, add things to them and embellish it like that. That’s one method I use. I do use markers and pens, usually Japanese pens because of the colors.”

He said drawing is a free-flowing experience where he taps into his subconscious.

“It’s thinking on paper,” Ocasek said. “When I’m quiet and I’m pondering, that’s the best time to do art. I don’t know when it’s going to be, but it’s usually just when I’m meditating on something. The concentration thing is really a bit like meditation, because in meditation, you’re supposed to have a focus, and this is what I focus on when I’m deep in thought.”

He said it’s fun to see the art organically develop on the page — just like song lyrics.

“The creative process is not so different from writing music,” Ocasek said. “You start with a blank page and at the end, you have something. …  I don’t preconceive what it’s going to be.”

Ocasek first took up drawing and songwriting as a teenager in Baltimore, Maryland.

“I just kind of started drawing; I don’t know why,” Ocasek said. “It’s the same reason I don’t know why I said, ‘I think I want to write songs.’ … I got a guitar when I was 14 and started to try to write songs. Obviously, I didn’t have any good ones when I was 14, but I loved music. My family wasn’t particularly musical. They didn’t play instruments. In fact, they probably frowned upon it. So, it just came to me, and I just felt like music was something I could not ignore.”

At age 16, his family moved to Cleveland, Ohio, where he met future bandmate Benjamin Orr during the 1960s. Eventually, they made their way to Boston to form The Cars in 1976, alongside lead guitarist Elliot Easton, keyboardist Greg Hawkes and drummer David Robinson.

Their 1978 self-titled debut album featured the breakthrough hit “Just What I Needed.”

“I wrote it in Boston,” Ocasek said. “I was in a basement. Once I got everybody in the band together … I did a big writing spree because it was going to be a new band. I think it came out of that bunch of songs. Maybe that was the time the songs were finally good enough.”

“I don’t think it was [based on an actual love triangle],” Ocasek said. “A lot of the songs I write are just from things I see or things I perceive or things that could be. So, I usually don’t have a specific thing in mind; it’s just a reality that I see.”

“I remember ‘Shake It Up.’ I used to think that it was my silliest song, but so many people liked it that I had to do it, so I just kept doing it,” Ocasek said. “It was kind of a cool little thing.”

What made the “new wave” genre so appealing? Why bend music history in that direction?

“I don’t know why The Cars sounded like The Cars,” Ocasek said. “It was obviously the combination of the people in the band, but we weren’t trying to have a sound or try to sound like anybody else. We were pretty locked away in Boston just playing the club scene. It wasn’t like, ‘Oh, there’s this new-wave thing going on.’ It just was what the band sounded like. But I do think it was interesting that we approached it with a keyboard-oriented thing.”

All these years later, their contributions haven’t gone unnoticed. The Cars will be inducted into the Rock & Roll Hall of Fame on April 14 in a class that includes Dire Straits, Moody Blues, Nina Simone and Bon Jovi. However, it will be a bittersweet induction without Orr, who died in 2000.

“It would have been nice [to have Benjamin Orr there],” Ocasek said. “But, it is a great honor. It’s nice to be in the crew. That’ll be great. I’m looking forward to it. I’m excited to get there and be part of that whole situation, especially since it’s in Cleveland, where I used to live.”

But before heading back to his teenage stomping grounds, he’s swinging back through the Maryland and Virginia area, where he first learned to play and draw as a young boy.

Click here for more exhibit details. Listen to the full conversation with The Cars’ Ric Ocasek below: 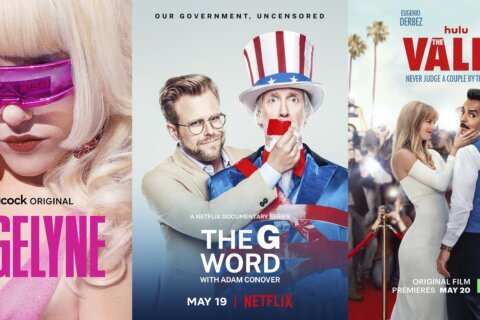