Coronavirus News: 'Is It Normal Yet' Podcast: A perfect storm | Who's getting coronavirus in Montgomery Co.? | Future of rapid testing | Latest cases in DC region
Home » Entertainment News » Column: My skeptical daughter…

Column: My skeptical daughter wound up loving Gloria Estefan’s ‘On Your Feet’

WASHINGTON — Whether you’re a fan of the Latin-fused pop of Gloria Estefan or not, the dance and music of “On…
Listen now to WTOP News WTOP.com | Alexa | Google Home | WTOP App | 103.5 FM

WASHINGTON — Whether you’re a fan of the Latin-fused pop of Gloria Estefan or not, the dance and music of “On Your Feet!” are infectious and “feel good.”

I happened upon it while trying to expand the mind of my daughter, who rolls her eyes and says, “Is that ’80s music?” Admittedly, I was unaware of the backstory, but like my young one, I was enthralled with the tale unfolding between song, dance and perpetual scene changes.

The musical is based on the book by Alexander Dinelaris, choreographed by Sergio Trujillo and set to the music of Emilio and Gloria Estefan and the Miami Sound Machine.

The family story developed easily, from the conflict of Gloria and her mom, to the adulation of her deployed dad, to the constant elevating of her grandmother. For a few hours, you were transported to a respectful fly-on-the-wall status. And who knew that it was the constant prodding of her grandmother that allowed Gloria to share her talents with already rising producer Emilio?

There was a lot of story to cover in a little over two hours, but the time was filled with amazing dancing and compelling music that never lost the attention of some doubting audience members.

I’ve always loved Estefan’s music, never really knowing the humble beginnings. Not only did she have to face the barriers of a male-dominated music business, it was eye-opening learning the struggles she and Emilio faced in breaking through to mainstream music.

As in many great success stories, the duo was forced to take a grassroots, word-of-mouth approach in letting their art speak for itself. They were innovators of their time and therefore faced great discrimination. It’s always that which we are unfamiliar that makes us most fearful.

Thus, one of the biggest applause lines of the night came from Emilio’s response to a record executive who insinuated their music wasn’t American enough. He retorts, after working hard and paying taxes for 15 years that, “This is what America looks like!”

From beginning to end, the story, the music and the dance was all very uplifting and transporting. I had tried to explain to my daughter how Gloria Estefan had changed the shape of music, but seeing the story and hearing it told through their joyous sound was family time well spent.

The proof? After the show, we came home and my daughter downloaded all of her music. 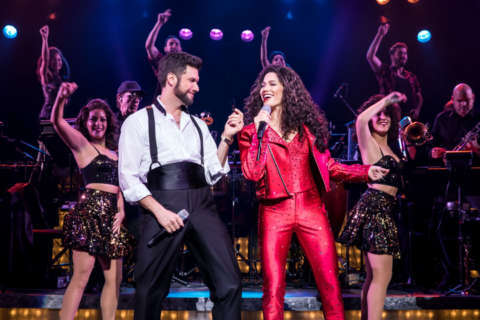