WASHINGTON — How’d you like to ring in the new year with the Queen of Funk?

“For my show, I’ve been at it so long, I have hits throughout probably the last three generations. So I have to really think out my shows and try to make everybody happy. So there’ll be all the hits in there from Rufus onto my own career, right up to today. Just a walk through time,” Khan tells WTOP.

Born Yvette Marie Stevens, her “walk through time” began in 1953, on the South Side of Chicago, where at age 11, she and her friends formed a music group called The Crystalettes.

“Two friends of mine, a girl named Sinise Levy, another girl named Nikki Scott and my sister Taka and myself. We were all sitting on our porch looking at the snow come down onto the sidewalk and how it was looking like crystal, and I said, ‘I know! Let’s call our group The Crystalettes,'” she recalls.

Khan’s mom made their costumes, styled their hair and escorted them to local talent shows.

“We won a lot of talent shows (singing) stuff we were hearing on the radio. We did some Gladys Knight, ‘Cowboys to Girls,’ stuff by The Temptations, Martha & The Vandellas. It was cute.”

Still, Khan never thought she had a future in music.

“During all this time, I didn’t really want to be a singer. I was looking into (being a) botanist or looking into biology or teaching or something like that. That’s where my heart was,” she says.

But all that changed when she quit high school in 1969 and ran away from home at age 16.

“My mother and I weren’t getting along, so I left home. I ran away. I was living in a hippie commune kind of a situation. There were several people who had bands and stuff there, and I joined one of their bands, got on welfare, and refused to go back home. So I had to change my plans, didn’t I?”

So, she started singing to bring in money for the commune, and upon joining the Black Panther Movement, adopted the African name “Chaka Khan.”

“When I saw the reactions that I was getting from singing, I said, ‘Oh, this is a breeze. This is something I just do for fun.’ So that’s where the singer came in,” she says.

The rest of us are lucky she didn’t choose botany. Think of all the great music we would have missed.

“All those great plants I could have grown. … Stevie Wonder sort of beat me to it.”

“Bob came in and said, ‘Guys, would you like to meet Stevie Wonder?’ We were like, ‘Of course!’ … Stevie sat down behind the piano and started playing some stuff, and I said, ‘I don’t like any of that. Do you got anything else?’ He said, ‘What’s your birth sign?’ I told him I was Aries, and he said, ‘Oh I got something for you.’ So he started playing the signature chords and wocka wocka stuff.”

That “wocka wocka” song became the classic “Tell Me Something Good” (1974), reaching No. 3 on the Billboard Hot 100 and winning Rufus a Grammy for Best R&B Performance by a Duo or Group.

“I remember us all being very excited and blown away. And of course it gives you more gas, you say, ‘OK, we can do this for real,'” she says.

“That’s that anthem song I have. … I felt funny at that time in my life singing, ‘I’m Every Woman,’ I remember feeling, ‘How dare I say that?’ Now I get it, but I didn’t get it then. It’s funny how you have to grow into things sometimes. Some part of me knew that it was the right thing to do I think.”

It might very well be her signature song, later covered by the late Whitney Houston.

While Chaka Khan & Rufus picked up another Grammy for the 1983 hit song “Ain’t Nobody,” tensions began to mount over Khan’s rising solo career outside of the band.

“I was feeling very weird. I’ve always been with a band or a group, and I loved that, the anonymity of that. Rufus didn’t start falling apart until the record label started to put my name out front, ‘Chaka Khan & Rufus,’ that was the beginning of our downfall. So I had a problem with that whole thing. So when we had to break up and I was on stage by myself … it felt really weird for a long time,” she says.

After the split, Khan saw continued success, winning Best R&B Female Vocal Performance on the album “Chaka Khan” in 1984, Best Vocal Arrangement for her work with Arif Mardin on “Be Bop Medley” in 1984, and Best R&B Vocal Performance for covering Prince’s “I Feel for You” in 1985. The latter-most became a hit, but it ironically happened by chance as both artists were in San Francisco.

“I get this phone call … and he’s talking to me, but he was talking like Sly (of The Family Stone). Sly and I were very good friends at the time, and he said, ‘I’m in the studio. Why don’t you come down?’ So I thought I was going down to the studio to see Sly. I ran down there to see him. The whole studio was empty except for one booth and there was this little short guy in there with a guitar. I said, ‘Where’s Sly?” And he said, ‘I’m the one who called you.’ So he tricked me! … That’s when I first met him.”

“It was fabulous. It was Ray and Quincy (Jones). It’s always great to work with Quincy,” she says.

Since then, over the past 25 years, Khan has lost track of all the Grammys she won, including “The Woman I Am” in 1993; her Funk Brothers group cover of Marvin Gaye’s “What’s Going On;” her duet with Blige on “Disrespectful” in 2008; and winning Best R&B Album for “Funk This” in 2008.

The decades upon decades of accolades make her one of the most prolific music artists of all time. In a recent musician poll by VH1, Khan ranked No. 17 on the 100 Greatest Women of Rock & Roll, ahead of legends like Gladys Knight, Etta James, Linda Rondstadt, Joan Jett and Pat Benatar.

It’s rare to see such a legend in concert, let alone at the Kennedy Center on New Year’s Eve. 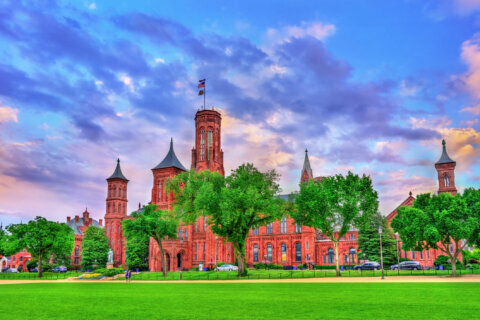