WASHINGTON — There’s a bump in the night and nothing but your imagination can explain it — or make it…
Listen now to WTOP News WTOP.com | Alexa | Google Home | WTOP App | 103.5 FM

WASHINGTON — There’s a bump in the night and nothing but your imagination can explain it — or make it go away.

The subtle movement by the once inanimate doll on the chair, the drawing of the curtains on the baby’s bassinet to reveal what’s inside, the relentless pounding on the door by something that couldn’t possibly be of this world.

This boogeyman can be the sinister ghost of a child — or the devil himself. Whatever it is, it’s the supernatural whisper that convinces nanny to hang herself in front of a child’s birthday party. It cajoles a father to chase his son with an ax through a snowy maze in the dead of winter. It’s the deepest darkest forms of evil that dwell in tiny puzzle boxes, puppets, mirrors and Ouija boards — patiently waiting to be released. 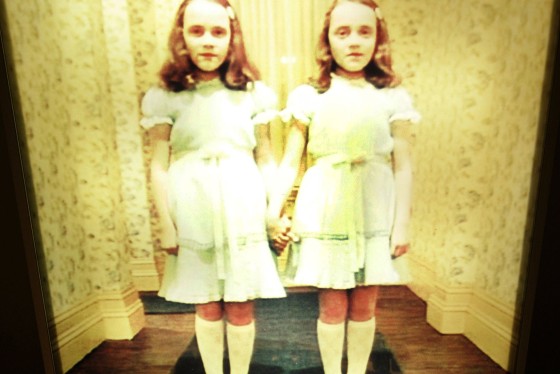 Amid the computer-generated blood and gore of today’s slasher/torture/splatter cinema, there is what many call the golden age of supernatural-psychological horror.

The golden age of supernatural cinema, which spans the 1960s and 1970s with a smattering of tour de force offspring in the decades beyond, is often lamented as a bygone era, one that made way for today’s hyper flesh-and-gore computer generated imagery (CGI), invading the genre like a single-celled, money generating organism. One can’t turn on cable television today without stumbling on a flick centered around an interchangeable group of teenagers murdered one by one in increasingly shocking ways in a cabin, an abandoned mental hospital or a hostel.

Gone is the desire to scare an audience with the mere suggestion of the macabre, to build hackle-raising tension and the feeling of dread, to unlock doors toward a shocking denouement, rather than race from one bloody murder to the next with no more clarity or realization at the end than at the beginning. Today, the visual shock of visceral pain — crushed bones, ripped hair and torn limbs sewn together in a “Human Centipede” sort of nightmare — appears to prevail. Digital technology has taken fear to the next level, but why does it seem so unedifying?

“It’s like everybody (in the west anyway) stopped treating horror movies as actual movies. Calling the genre products of this period rote is almost an understatement,” complains online critic Grandy Peace. “Jump scares here. Soaring soundtrack there, so the audience gets its cues … the script is next to irrelevant, it’s really only important that it have bodies and that it leave room for a sequel …”

On the other hand, many of the old-school supernatural flicks were based on real literature —- Shirley Jackson, Edgar Allan Poe, H.P. Lovecraft, Richard Matheson and later Stephen King. These books were plumbed in the budding postwar culture of the early 1960s and were done with a psychological depth and rendering not seen before. Think director Roger Corman and movies like “The Haunting,” “Eye of the Devil,” “Carnival of Souls” and “Night of the Living Dead.” Later, directors like Stanley Kubrick, Roman Polanski and Brian DePalma would flesh out the genre with a long line of box office stars like Julie Christie, Gregory Peck, Jacqueline Bisset, Mia Farrow, Katherine Ross, John Cassavetes and Donald Sutherland. In 1973 alone, “The Exorcist,” “The Legend of Hell House,” “Don’t Look Now” and “The Wicker Man” were released to terrified mainstream audiences.

“I didn’t use visual effects, we didn’t have anything like what you have today,” “Exorcist” director William Friedkin told WTOP’s Jason Fraley this week, not so much knocking the technology as pointing out the historical contrast. “They can do anything with computer-generated imagery today, and we did not have that, we did not have that in ’70s. Everything you see in those films we had to do.”

Of course, “The Exorcist” is studied today for its innovative camerawork and special effects, but one could argue that its power relies on what you don’t see in the film, just as much as what you do.

Take the accelerating fear as Danny rides his Big Wheel through the carpeted halls of the sprawling hotel in Stanley Kubrick’s masterpiece “The Shining,” or the strange villagers donning animal masks that flit in and out of the scenes in “The Wicker Man.” Something dreadful is going to happen, and we don’t known how or when, but it will be fun getting there.

Because what might be behind the hedgerow in an English garden on a sunny day could be more terrifying than the man in the ski mask flashing a bloody knife at night — if done right. Some believe the first hour of John Carpenter’s slasher masterpiece “Halloween,” where Jamie Lee Curtis gets only small glimpses of killer Michael Myers among hanging laundry or in a car outside the school, is far scarier than the murder-by-numbers sequence in the last 30 minutes of the film.

Most often, it’s the feeling of uneasiness we remember, the shock after an entire high school class is sent to a fiery grave by a scorned girl with supernatural powers in “Carrie,” or when pregnant Mia Farrow finds release in gobbling down bloody scraps of raw meat in “Rosemary’s Baby.”

Some of this was certainly a reflection of the times — a period in the ’60s and ’70s when the country was in turmoil over the Vietnam War and a younger generation sought meaning in pop-psychology and spiritualism. Certainly the rise of revolutionary politics, communes, biker gangs, and the crimes of the Manson Family gave way to some of the more paranoid tropes in the movies of that era, rightly or wrongly, says Adam Lowenstein, associate professor of film studies at the University of Pittsburgh and author of Shocking Representation: Historical Trauma, National Cinema, and the Modern Horror Film.

But if the supernatural era said something about yesterday, what do the splatter exploitation movies say about today? Lowenstein cautions against nostalgia, warning that we shouldn’t read too much into these movies, because horror, just like any other art form, is what the audience puts into it.

For example, while George Romero’s “Night of the Living Dead” is praised today as everything from a civil rights metaphor to a critique of the Vietnam War, it was criticized by reviewers upon its 1968 release for its gore and “social irresponsibility.”

“Everything we take for granted about it was not immediately resonate with people at the time,” said Lowenstein. “It took time for all that to be seen. We can’t always see films for what they are when they first come out. They need to percolate.”

“I do think the horror film has a much more profound and acclimated connection to society and politics than people give the genre credit for,” Lowenstein adds. “But it is often hard to pin it down … it wouldn’t be art if that was the case.”

As he points out, there is plenty of room in horror for diversity. The supernatural strain is but one subgenre of its time. Long before, there were monster movies, in fact an entire subgenre of “Dracula” was stretched out for decades, thanks in part to the Hammer Films era. Romero opened up the zombie front, which is still shuffling along quite strongly in “The Walking Dead.” In the 1950s, there were teenage drive-in flicks like “The Blob,” and “The Creature from the Black Lagoon,” the descendants of which are in a million Syfy Channel creature features today.

“What I like about the horror genre is there is enough room for strange mutations and all kinds of horror and the sort of permutations and cross pollinations of all kinds,” Lowenstein tells WTOP.

For every “Exorcist” that film students seize upon for metaphors and pinnacles in moviemaking, he said there is much to be mined from the often maligned blood and gore films of today. “Hostel,” for example, could say a lot about Americans’ post-9/11 fears, while “Saw” may represent an entirely new narrative-construction of the video game aesthetic.

“If you look at it, it’s very close to the video game syntax,” says Lowenstein, describing the plot about a maniacal man called “Jigsaw” who puts his victims through a series of “tests” involving psychological and physical torture. “Viewers feel the satisfaction of a gaming logic, they experience this on one level to another. We might be seeing something important, too, as cinema of course is taking a back seat in many ways to an industry (gaming) that is much more successful, economically. But that’s all conjecture, and it’s for us only to imagine at this point.”

So while bygone eras are fun to ponder, he warns against funereal lamentations.

“There are always enough places you can dig in to find something else that’s happening,” he said.

After all, when the industry was least expecting it, something like “The Blair Witch Project” (1999) took the genre by storm, relying almost entirely on the power of suggestion.

“(Horror) gives us things that are unexpected and new, and that’s just part of its DNA,” Lowenstein says. “Just when it seems one formula is dominating, that’s really not the case.”