The former congressman’s announcement Monday makes it less likely there will be a top-drawer primary challenger to Gov. Brian Kemp, a frequent target of Trump’s ire after the governor helped certify President Joe Biden’s victory in November.

It also leaves Republicans without an obvious heavyweight against Democratic Sen. Raphael Warnock, who won a special election runoff in January over then-Sen. Kelly Loeffler and is seeking a full-term next year. Collins finished third in the first round, missing the runoff.

Victories by Warnock and fellow Georgia Sen. Jon Ossoff gave Democrats control of the Senate, and the 2022 contest will again help determine the chamber’s balance for the final two years of Biden’s term.

Collins didn’t rule out a future statewide run, describing his decision as “goodbye for now, but probably not forever.” He said he’d continue “shaping our conservative message to help Republicans win back the House and the Senate.”

Chip Lake, Collins’ top political adviser, said Collins told him in one-on-one conversations Sunday evening and again Monday that a statewide race requires a candidate “to give it 110%, and he is not in a position to get to that” in 2022.

Several Republicans, including sitting U.S. Reps. Buddy Carter and Drew Ferguson and former football star Herschel Walker, are eying the seat. But none would enter the 2022 contest with the political profile Collins carries as one of Trump’s fiercest defenders during the 2019-20 impeachment proceedings against the former president.

Lake confirmed Collins and Trump have talked periodically since the president left office in January though he said it’s unclear how much Trump tried to coax Collins into a 2022 campaign.

Collins’ alliance with Trump wasn’t enough in last November’s all-party election that pitted Loeffler as the Republican incumbent against 19 other candidates. But Trump’s support would have made him a favorite in an open Republican Senate primary and it could have made him a legitimate threat in a primary bid against Kemp.

With Collins taking a pass, it leaves open the question of how involved Trump will be in Georgia in 2022, even as the former president and his most vocal advocates are intent on cementing their influence on the GOP as the party adjusts to Georgia’s newfound battleground status. Biden won the state by about 12,000 votes out of 5 million cast.

A Trump aide did not immediately respond to a request for comment.

Trump pressured Kemp to appoint Collins to succeed Sen. Johnny Isakson in early 2020. Kemp instead tapped Loeffler, a tremendously wealthy Atlanta businesswoman whom Trump supporters viewed with suspicion no matter how eagerly she embraced the president.

Those tensions boiled over in the Senate runoff as Trump falsely claimed that Biden’s victory in Georgia was fraudulent and that Georgia Republicans didn’t do enough to help him overturn it. Competing GOP camps blame the dynamics for their 2020 defeats. Trump backers argue that enough of the president’s supporters abandoned Loeffler and Sen. David Perdue to ensure their losses. More establishment Republicans argue that Trump’s false narratives about the election drove more moderate Republicans and independents, especially in metro Atlanta, to the Democratic column.

Kemp has since been censured by several county Republican parties, suggesting he faces the same difficult balance between the GOP’s right flank and the more moderate center. Still, the incumbent governor’s forceful advocacy on behalf of the sweeping election law overhaul he signed into law has helped improve his standing with some Republicans who felt he didn’t do enough to challenge Biden’s Georgia win.

Warnock’s campaign, meanwhile, said recently that the senator raised $5.7 million between the Jan. 5 runoff and March 31, giving him a considerable head start on any potential Republican challenger.

“I think the window of opportunity for … anybody else to get in is closing,” said Republican Martha Zoller, a former congressional candidate and erstwhile adviser to Perdue and Kemp. “It’s a money thing.”

Lake acknowledged “we face challenges as a party” but argued the dynamics of midterms elections favor Republicans since Democrats will have to answer for their unified control of Washington in a state he said “is still center-right.”

“The 2020 election was all about Donald Trump,” he said. “But now 2022 will be about national Democrats. That’s a unifying deal for us.” 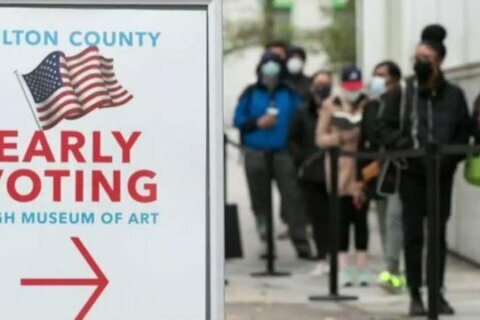