What Parents Need to Know About Cyberbullying

While in-person bullying declined last year when students were consigned to online school, cyberbullying continued unabated. In fact, with students experiencing more screen time than ever, studies show that it has grown.

While adults may picture bullying as the classic schoolyard confrontation, a scenario just as likely today is a digital interaction via text, an app or social media. Though they don’t take place face-to-face, experts say these interactions can be equally harmful.

In a 2021 survey by the Cyberbullying Research Center, almost one in four U.S. students ages 13 to 17 said they had been bullied online in the last month, up from about 17% in 2019. LGBTQ youth are consistently more likely to be victimized, and in the latest survey 31.7% reported experiencing cyberbullying.

[READ: As Students Return to School, So Does School Violence.]

Unlike schoolyard aggression, cyberbullying can take place anywhere. A child can be cyberbullied while they’re sitting directly in front of a parent or caretaker, using a laptop, phone or tablet to access an app, platform or video game where they encounter bullies.

Even if parents look over a child’s shoulder, what they see may not scream “danger,” according to experts. Often, it can come in the form of comments or online actions.

“They’re just saying, ‘I hate your content’ or ‘I’m unfollowing you,’ and I don’t think they realize that that could be considered bullying,” Rogers says.

In more extreme cases, cyberbullying is very deliberate. It can involve fake accounts that target specific children. It can even escalate quickly to threats that extend outside the digital realm.

Trueman says she was targeted by cyberbullies at 15, initially on a major social media platform. Her mother filed complaint forms, but nothing came of them and the cyberbullying spread to other channels. Trueman gives her account in a nearly nine-minute video, describing ethnic slurs and other abuse. She urges young people who experience cyberbullying to tell their parents, a guidance counselor or someone else they trust.

“Nobody should ever be made to feel the way I have been made to live and to feel,” she says in the video.

Combating the Growth of Cyberbullying

While educators are extremely aware of the problem, issues related to technology, privacy and sheer volume make it difficult for them to address cyberbullying. Many schools have tried to educate students and parents, and most schools have rules about when, where and how students can use their phones.

Some schools have also gone a step farther. A school district in Maine, for example, began offering a $100 reward to help identify anonymous cyberbullies, after administrators in middle and high schools were tipped off about several Instagram accounts targeting students.

After complaints about similar anonymous Instagram accounts at the Granite School District in Utah, the district said one employee dedicates most of their time to identifying and reporting such pages. The schools also block some sites, though students can get around it by using personal data plans, spokesman Ben Horsley told ABC4.com.

“In reality, schools should not have to monitor your child’s social media account,” he says. “That is your job as a parent.”

Experts say that one major step that parents can take to prevent problems is to become more aware of what their children are doing online. Simply preventing children from using one platform or another is not always a solution.

“As a parent, you can try your hardest to keep them off of apps, you can monitor phones, you can whatever,” Rogers says. “But if someone in their class has access, they are going to have access. And there’s nothing that you can do about that.”

Indeed, the world of online platforms and apps continues to expand beyond Instagram, TikTok, Snapchat and other sites that parents may recognize. For example, bullying can take place in the context of a video game, where kids play with others, some of whom they know and some of whom they don’t.

The federal clearinghouse Stopbullying.gov, which offers resources for parents, lists about 30 digital platforms where cyberbullying can take place, many of which may be new to adults. For example:

— Discord is a voice-over-IP app that lets users video chat with others, private message, and participate in public and private chat rooms. It’s popular with gamers, who use it to communicate while they play.

— Houseparty is a group video chat and social networking app that allows up to eight people to video chat together in virtual “rooms.”

— Kik is a messaging app that allows users of all ages to contact others anonymously.

— Line is a messaging app that lets users make free phone calls, leave voice messages and text. Users can delete texts or chats from the recipient’s phone using a timer.

The rules that apply when using each of these platforms are set by the companies that created them, and they may vary widely.

On the other side of that coin, some social media platforms are working to combat cyberbullying and other forms of online aggression. For example, Pixstory is a new platform designed to prevent misinformation and reduce aggressive behavior online. Each user gets an integrity score.

“Pixstory is a new social media platform committed to transparency, integrity and decency in which users are held accountable to the truth,” its website says.

Founder and CEO Appu Suresh says that cyberbullying can be addressed by platforms because it is easier to identify than misinformation. Social media companies simply have to commit to making their platforms less conducive to bullying.

“Cyberbullying is something which can be easily fixed because it’s behavior,” he says, adding that, “we need to stop making a differentiation between abusive behavior and aggressive behavior.”

What Parents Can Do

For parents who want to identify and prevent cyberbullying, here are some strategies:

— Monitor your child’s online activity. Laur Trueman, the mother of Lillee Jean Trueman, says parents must pay attention to what their children are doing online, even if it is difficult to do. “You need to be aware,” she says. “They could be online in a place they shouldn’t be. We live in a digital age and you need to monitor them even if you feel overbearing and your child doesn’t like it.”

— Educate children on safe practices. The National Crime Prevention Council recommends that parents remind children not to give our personal information, share passwords, open messages from people they don’t know or respond to mean or threatening messages.

— Look for signs that something is not right. When children stop using computers without explanation, appear angry or depressed after going online, are secretive about their online lives or withdraw from friends and family, they could be experiencing problems, according to Scholastic. Parents should be ready to step in and get professional help from a counselor or therapist if warranted.

— Discuss what’s happening. Experts say that talking to children about their digital lives, both about what is happening and how they can respond, is vital. “I think that the best thing that parents can do is have conversations,” Rogers says.

Searching for a school? Explore our K-12 directory.

How to Get Private School Financial Aid

Is a ‘Lab School’ Right for Your Child?

What Parents Need to Know About Cyberbullying originally appeared on usnews.com 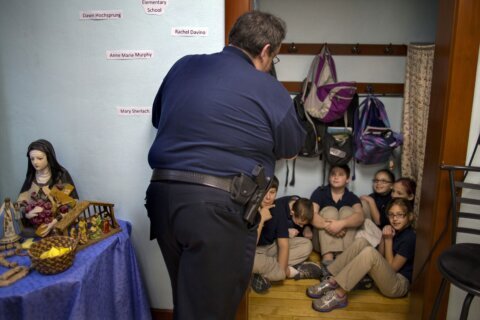