INDIANAPOLIS (AP) — A federal appeals court ruled Monday that Indiana University can proceed with its plan to require students and employees to get vaccinated for COVID-19, in what is the highest court decision regarding college immunization mandates.

The Chicago-based appeals court upheld an Indiana district court judge’s ruling that found that the university was acting reasonably “in pursuing public health and safety for its campus communities.”

Both courts rejected a request by eight IU students who sought to block the requirement while they challenge its legality, claiming that it would violate their constitutional rights by forcing them to receive unwanted medical treatment.

The policy makes vaccination a condition of attending the university, and students who don’t want to get vaccinated can also seek “ample educational opportunities” elsewhere, according to the appeals court ruling. Still, the vaccination policy allows exemptions on religious and medical grounds, which the court said provides constitutional accommodations for those who qualify.

“Once again, the court has affirmed our legitimate public health interest in assuring the safety of our students, faculty and staff and we are excited to welcome our community back for the fall semester,” the university said in a statement Monday.

James Bopp, a lawyer for the plaintiffs who takes on conservative political causes, said he would ask the U.S. Supreme Court to review the rulings, which legal experts say are the first from federal courts regarding college immunization mandates. Similar lawsuits against student vaccine requirements at the University of Connecticut and the California State University system are awaiting action.

College officials across the country have struggled with whether they have the authority to require student vaccinations, which some see as key to returning campus to in-person classes and other normal activities.

Bopp argues that such vaccine requirements violate their rights to “bodily autonomy” and that the COVID-19 vaccines differ from other immunizations frequently required for college students, such as for measles and meningitis, because of their newness and the lower risks that younger adults have of suffering from severe bouts of COVID-19.

The lawsuit was filed after IU officials announced in May that the school would require its roughly 90,000 students and 40,000 employees on its seven campuses to receive COVID-19 vaccinations for the fall semester. Students who don’t comply will have their registration canceled and workers who don’t will lose their jobs.

IU initially was going to require students and employees to provide immunization documentation. That sparked a backlash from Republican state lawmakers and the state attorney general, leading university officials to make providing proof of vaccination optional and allow students and employees to simply attest to their vaccination in an online form.

The university is allowing religious and medical exemptions, but school spokesman Chuck Carney said more than 80% of students have reported receiving at least one dose.

This story was corrected to fix the spelling of James Bopp’s name. It had been misspelled “Bobb.” 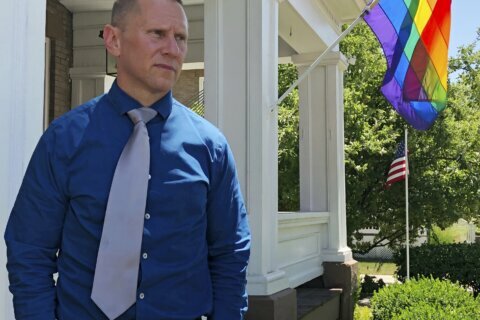