Nearly a dozen local sixth, seventh and eighth-graders are among the almost 300 spellers vying for the trophy in the Scripps National Spelling Bee this week at National Harbor and broadcast on ESPN.
Listen now to WTOP News WTOP.com | Alexa | Google Home | WTOP App | 103.5 FM
(1/7) 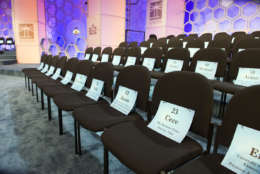 WASHINGTON — Nearly a dozen local sixth, seventh and eighth-graders are among the almost 300 spellers vying for the trophy in the Scripps National Spelling Bee this week at National Harbor and broadcast live on ESPN.

The local spelling whizzes join 291 other students — ranging from 6 to 15 — competing over two days and multiple rounds to take the title of top speller.

Along with bragging rights, champion spellers take home $40,000 cash, an engraved trophy, a $2,500 savings bond, $400 worth of reference works and appearances on “LIVE with Kelly and Ryan” and “Jimmy Kimmel Live!”

After two preliminary rounds Wednesday, the finals kick off Thursday. Round one of the finals starts at 10 a.m. and will be broadcast on ESPN2. The second round of the finals airs in prime time on ESPN starting at 8 p.m.

The last (and only) time a local won the bee was in 1984, when 13-year-old Daniel Greenblatt, from Sterling, Virginia, won with “luge.”

The prizes were more modest back then. Greenblatt won a trophy, a $1,000 check and an appearance on the “Tonight Show” with Johnny Carson.

Check out all the local contestants below: