It could take weeks before the red paint and graffiti can be fully cleaned from the Washington Monument.
Listen now to WTOP News WTOP.com | Alexa | Google Home | WTOP App | 103.5 FM
(1/4) 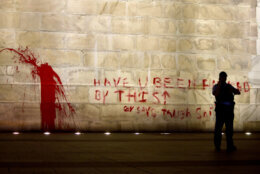 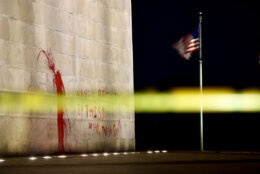 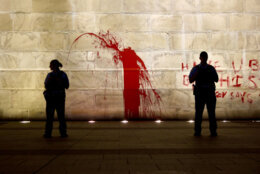 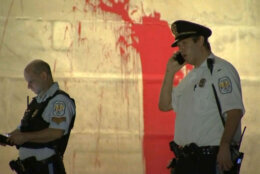 Police say a man is in custody after allegedly vandalizing the base of the Washington Monument with red paint early Tuesday night.

U.S. Park Police said the suspect was taken into custody at around 8 p.m. and the base of the monument has been temporarily closed.

In photos distributed on social media, the graffiti painted at the base of the monument reads, “Have you been f**ked by this / Gov says tough sh*t.”

NEW: U.S. Park Police arrest man who poured a can of red paint on the base of Washington Monument tonight and wrote the message “have you been f— by this, gov says tough s—-” @nbcwashington pic.twitter.com/JwXoVURYZE

Police have not said whether the suspect had been acting alone.

Mike Litterst, spokesman for the National Park Service, told WTOP it could take two to three weeks before the paint is completely removed. Because marble is porous and could have absorbed more of the paint, multiple treatments will be applied during the restoration process.

In a tweet, the National Park Service said its team plans to start the cleanup process “first thing in the morning.” Litterst said daily operations around the monument should not be impacted, but the area around the base of the monument will be closed off during the restoration process.