‘Chick’ this out: Pair of ‘critically endangered’ birds hatches at National Zoo 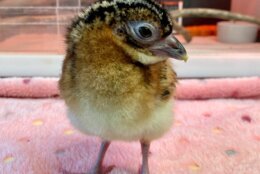 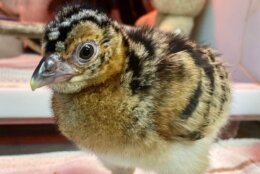 Two chicks hatched at the Smithsonian’s National Zoo in August are “thriving, confident, and curious,” according to zoo officials.

The female birds, Aluna and Lulo, are blue-billed curassows and being cared for “off-exhibit.”

Blue-billed curassows, which are native to Colombia, are considered “critically endangered” by the International Union of Conservation of Nature.

The zoo said scientists estimate between 1,000 and 2,500 remain in the wild due to habitat loss and fragmentation.

While the birds have historically lived throughout northern Colombia, the entire wild population now only occupies a few small areas of tropical lowland forest.

There are 73 blue-billed curassows, including Aluna and Lulo, located in North America, according to the zoo — most of them males.

“Every moment with these chicks has been a dream come true for me,” said animal keeper Heather Anderson.

She said it has been her goal to breed the endangered fuzzy critters since she began zookeeping. “It was amazing to watch these precocial birds as their instinctual abilities to eat, perch and preen their feathers kicked in — all in the first day of life! For other bird species, those milestones could take weeks to achieve.”

Watch video of the chicks hatching below.

It remains unclear when zoo visitors will be able to watch them in person, as the zoo’s historic 1928 Bird House is currently closed for renovations. It is scheduled to reopen by the end of 2023.

During the renovation, the zoo said visitors can see other birds at the Cheetah Conservation Station, Small Mammal House, American Trail, Amazonia and Kids’ Farm exhibits.