A dog and one of the six puppies taken from her while in foster care will soon be reunited, but the D.C. Humane Rescue Alliance is still hoping that the others will soon be returned.
Listen now to WTOP News WTOP.com | Alexa | Google Home | WTOP App | 103.5 FM

A dog and one of the six puppies taken from her while in foster care will soon be reunited, and the D.C. Humane Rescue Alliance is still hoping for the return of the other missing puppies.

It happened after a community member found out puppy Aries’ back story from news reports. Aries was found in Northeast D.C. The alliance said that the person will get the $7,500 reward offered for information on what happened.

“We’re hopeful this will inspire others who might have information to come forward for both the welfare of the puppies, and peace of mind for our community and staff,” the HRA said in a statement.

Veterinarians who examined Aries on Thursday said he was “relatively” healthy, and he will soon join mother Godiva and sister Glitter.

“Both siblings will benefit from growing up together during their formative years and won’t experience the trauma of being separated from mom too early in their life,” the alliance said.

The puppies were just three and a half weeks old at the time they were separated, which is far too early for them to be separated from their mother. Such newborns need to be with their mother and siblings until they’re eight to 10 weeks old.

Before the puppies’ birth, their mother, Godiva, had been picked up in mid-July and was severely malnourished, the alliance said. After the litter of seven was born in early August, they were moved into a foster home.

Later that month, on Aug. 30, Godiva was found abandoned and tied to a pole. An investigation led to the discovery of one puppy Saturday in the 4800 block of North Capitol Street Northeast. That puppy has since been reunited with Godiva.

The alliance said that this is the first time something like this has happened in its fostering history.

“We foster thousands of animals and have never had this situation occur in the history of our foster program,” said Chris Schindler, who runs HRA’s foster program. 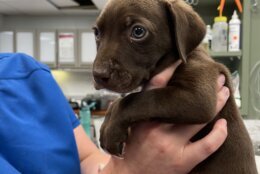 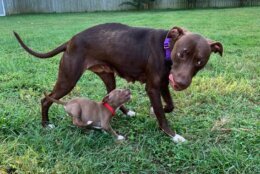 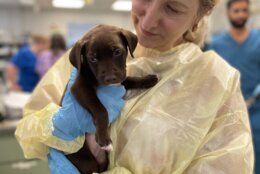 Foster families are vetted, trained, supplied with things they need and checked on regularly, especially those fostering young animals, the alliance told WTOP’s “DMV Download” podcast. While denying that the foster situation slipped through the cracks, the HRA said that staff checked on the dogs weekly.

The individuals involved in the foster care are under investigation and could face charges depending on what investigators learn, the alliance said.

The search continues for the other puppies. The Humane Rescue Alliance is offering a $7,500 reward for information leading to their return.

“There’s no penalty against somebody who may have unknowingly come into their care, and there’s certainly the reward money available and we’ll be paying a reward for this,” Schindler said.

WTOP’s Jack Pointer and Megan Cloherty contributed to this report.