Police in D.C. released the video of a fatal police shooting at the The Wharf that happened over the weekend.…
Listen now to WTOP News WTOP.com | Alexa | Google Home | WTOP App | 103.5 FM
(1/2) 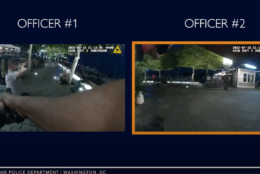 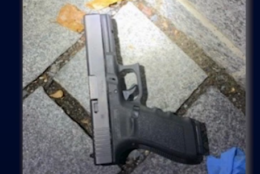 Police in D.C. released the video of a fatal police shooting at the The Wharf that happened over the weekend.

The edited footage shows people inside the Bistro du Jour restaurant scrambling for cover under tables. Closed-circuit TV video outside the restaurant shows a young man with a gun drawn and holding a bag. The video contains language some may consider offensive and graphic content some may find upsetting.

Police said that man was Lazarus Wilson, 23, of Virginia, who was shot and killed Saturday by off-duty D.C. police officer Cmdr. James Bagshaw.

Bagshaw was having dinner at the restaurant that night with his wife, who is also a D.C. police officer.

Police Chief Robert Contee said the video showed that people inside the restaurant clearly believed there was a threat.

Police said Friday that the couple were dining at the restaurant around 9:15 p.m., when they were alerted to a disturbance happening outside on The Wharf’s waterfront. When they exited the restaurant, they saw a man with his handgun pointed at another person.

Contee told NBC Washington that Bagshaw did not submit to a blood alcohol test to determine whether he had been drinking before the shooting.

“As far as I’m aware, there were no signs of impairment or anything like that,” Contee said, adding that Bagshaw still has not given a statement to investigators.

Police recovered “a semi-automatic handgun” at the crime scene. WTOP has reached out to police for information about the recovered gun. Police recovered a bag containing more than $30,000 in cash at the scene as well, according to WTOP’s news partners at NBC Washington.

Members of D.C. police who responded tried to administer lifesaving efforts. Wilson was taken to an area hospital where he was pronounced dead.

Contee said that Bagshaw has been a member of the police department for more than 15 years. He’s been placed on administrative leave as the investigation continues.