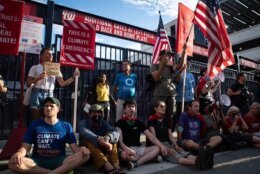 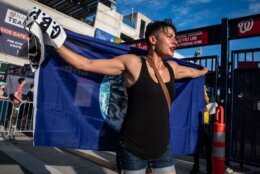 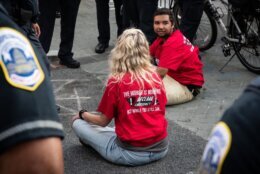 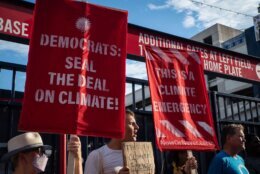 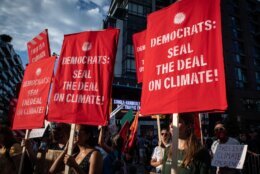 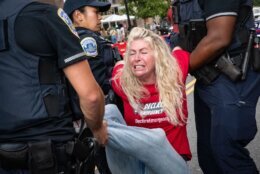 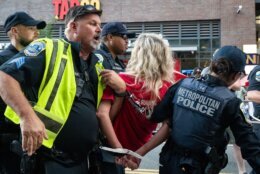 Climate protesters blocked gates at the Congressional Baseball Game at Nationals Park on Thursday in an attempt to urge politicians to secure climate investments and issue a federal declaration of a climate emergency.

The game continued until a brief rain delay at 9 p.m.


The protests started about 20 minutes before the game was scheduled to start at 7 p.m. and then dissipated shortly before 8 p.m. before the rain started.

WTOP’s Alejandro Alvarez witnessed at least two protesters get arrested as the climate group blocked gates outside of the Congressional Baseball Game. He said beyond that, police mostly watched the protesters surrounding the gates. The two protesters were arrested after they attempted to rush into the park multiple times, Alvarez said.

About 20 minutes before the Congressional Baseball Game was set to start, the center field gate to Nationals Park was blocked by several dozen climate protesters chanting “shut it down” and “democrats seal the deal.”

The protesters then split into three groups, and each group blocked a gate at the center field entrance of Nationals Park at Half Street and N Street. Alvarez said they linked arms while sitting on the ground, preventing people from passing through into the checkpoint and into the game.

Shortly after the group sat down. the police responded and closed the gates at the center field entrance, preventing people from getting into Nationals Park, according to Alvarez.

Police started directing people to other gates around the park in order to gain entrance to the game.

Shortly before 7 p.m., two protesters broke apart from the group sitting and attempted to rush the gate at the center field entrance at Nationals Park. They were apprehended by security and police arrested them. While they were about to be handcuffed, Alvarez said that they tried to rush into the gates past officers for a second time.

The group sitting in front of the park continued to stay there. People were still getting into the park, but Alvarez said they were being directed to other gates in the nearby area, and people moving into the park were gaining access, albeit slowly.

At 6 p.m., the group started chanting things like “we are united” and “we will not let you kill our planet” as they prepared to take action.

There was close police observation staging at the event. Both Capitol Police officers and D.C. police officers were there in the area.

They had with them a jazz band with trombones that could be heard in the area, performed by the “Too Much Talent Band,” a group of musicians that often play at local demonstrations.

“We need Joe Biden to announce a climate emergency,” a speaker said on a megaphone during the protest. “We need real action now.”

Under the name Now or Never, the group announced plans earlier this month to converge on Nats Park and disrupt the annual charity game. They didn’t publicly disclose their plans before the Congressional Baseball Game, but they had asked participants if they were ready to risk arrest for the cause and how comfortable that they would be dealing with law enforcement.

They said before they started the protest, the group split into separate color-coded groups and were labeled according to their willingness to engage in “direct action” or higher-risk actions that would place them at risk of arrest.

They were planning on up to 200 people to attend the protest.

The protesters were carrying signs saying things like “this is a climate emergency” and “end the filibuster.”

Before the protest, the group warned that its planned disruption of the game will be the first of several such actions over the coming months if Democratic members of Congress and the Biden administration fail to “leverage their full authority” to curb the climate crisis. Among their priorities are securing climate investments and a federal declaration of a climate emergency.

“Democrats must immediately declare a climate emergency and pass billions of dollars in clean energy investments into law. This is a critical, historic moment,” Now or Never explains on its website. “We see this summer as our last chance to pass bold, federal climate legislation. We need our leaders to see that too.”

In a surprise announcement a day before the game, Manchin and Senate Majority Leader Chuck Schumer announced they had reached an agreement on a reconciliation bill which would funnel billions toward energy security and tackling climate change. Monday, over a dozen Hill staffers protested in Schumer’s Senate office demanding he reopen negotiations on climate policy.

But despite the deal, activists are undeterred from demonstrating at the game on Thursday night: “We call on our politicians to seal the deal on clean energy and declare a climate emergency,” Now or Never tweeted.

In an FAQ posted to its website earlier this month, the group had admitted it might opt for a “more conciliatory tactic” if Congress were on the verge of meeting their demands, although it was unclear how Manchin’s agreement would impact their plans.

Around 250 protesters are expected to take part, although not all are likely to risk arrest. U.S. Capitol Police Chief Tom Manger said authorities are aware of the planned protest.