Jon Stewart was the center of attention at the Kennedy Center on Sunday night as he was awarded the Mark Twain Prize for lifetime achievement in American humor.
Listen now to WTOP News WTOP.com | Alexa | Google Home | WTOP App | 103.5 FM
(1/6) 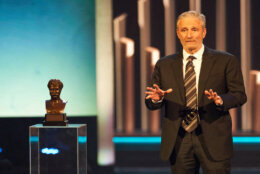 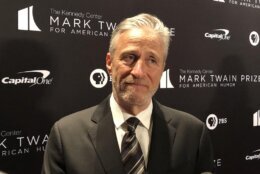 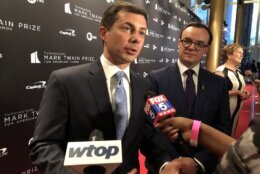 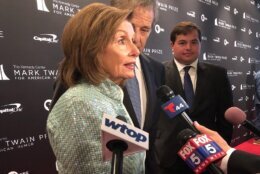 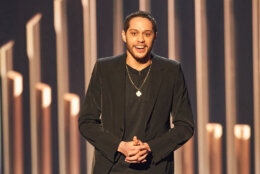 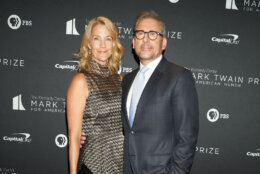 Jon Stewart was the center of attention at the Kennedy Center on Sunday night as he was awarded the Mark Twain Prize for lifetime achievement in American humor.

During the ceremony he was called the comedian with a conscience. On the red carpet before the show Jon Stewart was nervous about what was about to happen.

“This is the performance. This is the stuff they have been keeping from me. I don’t know what’s going to happen,” Stewart said. “This is the part of the night that I’m nervous about. Everything else has been a hang out with friends.”

Some of the names that honored him as the 23rd recipient of the Mark Twain Prize included former correspondents on The Daily Show Steve Carell, Olivia Munn and Ed Helms.

Dave Chappelle got the award in 2019 and Stewart spoke about him during his ceremony. Now, on Sunday, Chappelle spoke to Stewart.

“You are the cure to what ails our culture,” Chappelle said during the show.

Stewart then got out of his seat and ran to give Chappelle a hug.

Stephen Colbert was slated to be at the show to honor Stewart, but he tested positive for COVID-19 a few days before. He spoke via video message. Comedian Jon Oliver who hosts Last Week Tonight also appeared with a video message.

Bruce Springsteen also performed “Born to Run” and “Come Together,” a salute to Stewart’s passion for activism. Gary Clarke Jr. performed and was the music director for the event.

Watch video of Jon Stewart at the award ceremony.

Before the show, Stewart said that he was grateful for the journey.

“It’s meaningless if you don’t have the foundation underneath it, which is the memories and the joys of the people that you worked with,” Stewart said.

For more than 16 years Jon Stewart headed The Daily Show. He retired from the show in 2015.

He has also been extremely involved in his role as a political influencer. He was passionate about supporting health care for Sept. 11 first responders in New York City. Two first responders gave him his Mark Twain award on stage Sunday.

On the red carpet Jimmy Kimmel spoke about Stewart’s legacy.

“This really is the best honor you can get as a comedian and I can’t think of a better comedian or person really than Jon,” Kimmel said.

Stewart was grateful for the recognition but said it was more about getting to be with his crew again.

“The prize to me, and I know this sounds ridiculously corny, but the prize is all those years coming back and the affection and laughs and love that we all have for each other,” Stewart said.

Secretary of Transportation Pete Buttigieg said before the show that he believes Stewart has had a big impact politically.

“The reason his stuff is so funny is that it arises inside of us a deep awareness that something is wrong and needs to be different,” he said. “He takes that tension and gets us to pay more attention to it if we were just being lectured or fed talking points. I think he’s been more politically influential than even he’s maybe comfortable with.”

U.S. House of Representatives Speaker Nancy Pelosi said Stewart is passionate about causes close to him and that shows when he testifies on the Hill.

“He has been focused on what he knows about and cares about,” Pelosi said. “He doesn’t just come at it as a celebrity, he comes out of his commitment.”