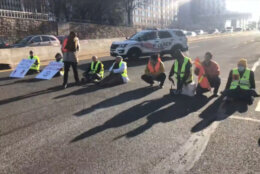 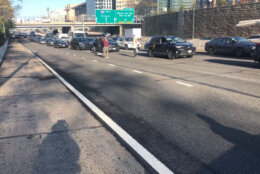 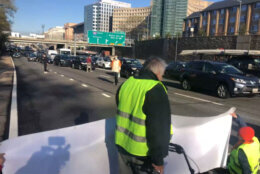 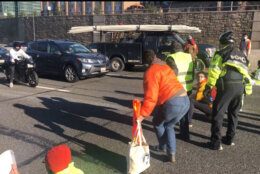 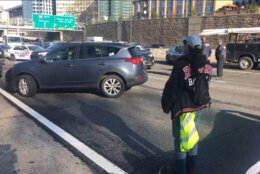 About a dozen protesters with Declare Emergency — a group of environmental activists who advocate for radical action to halt climate change, fossil fuel use and oil pipeline projects — took to the freeway after the 7th Street overpass around 8:30 a.m. Friday.

A livestream showed climate activists using flags to halt drivers after marching down the eastbound 7th Street ramp. Cars managed to get close to the activists before D.C. police stepped in front of them, with one driver yelling to officers: “Can’t you arrest these guys? I gotta get to work.”

VIDEO THREAD: This morning, climate activists with @ExtinctionR and @ScientistRebel1 including scientist Rose Abramoff @ultracricket stood in front of incoming traffic to block I-395 going into Washington DC.

About 10 minutes later, vehicles were turned around and sent the wrong way up the freeway under police direction. Police started arresting demonstrators around 9 a.m. and traffic flowed again shortly after.

On its Facebook page and website, Declare Emergency says it plans a series of direct actions through April 14 in the D.C. region urging President Joe Biden to declare a state of climate emergency and leverage executive power “to save this country from collapse.” Joining them are activists with an indigenous-led movement opposing an extension of Enbridge’s Line 3 tar sands pipeline in Minnesota.

Declare Emergency previously blocked I-395 on Monday, returning to the streets after a round of similar actions at the Third Street Tunnel in December, and near Dupont Circle in January. Five demonstrators, among them members of a group called Scientist Rebellion, were arrested after chaining themselves to the White House’s north fence on Wednesday.