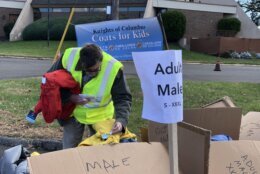 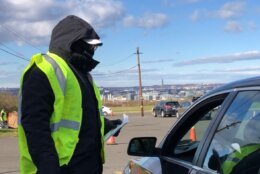 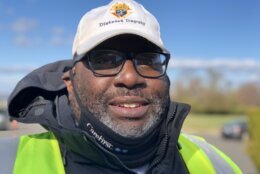 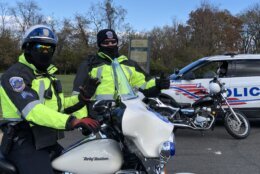 On a day when the wind whipped across a parking lot outside a Southeast D.C. church and temperatures dropped into the 30s, members of the D.C. Knights of Columbus distributed coats it bought for its annual coat drive.

Volunteer Anthony Diallo was the first person to greet visitors in the driveway of Our Lady of Perpetual Help. He was bundled up against Friday’s cold and greeted each recipient with a form to indicate the sizes they needed.

“I’m very happy and proud to do charitable work that’s meaningful, as well,” he said.

Once drivers filled out their forms, they moved on to volunteers such as Chris Pierno, who took the forms and fished through enormous boxes to find the right size — and, when possible, the preferred color.

Pierno and the other volunteers had been at it since they began preparing the operation around 7 a.m. The cars showed up right at 9 a.m.

Henry Hinnant was among the volunteers making sure that the coats each person got matched the size they were looking for. Some cars left the parking lot with stacks of coats.

The number of people coming to collect coats was down, he said, due in part to the weather. The wind was gusting by midmorning, but Hinnant was focused on the job of keeping others warm.

“It makes us happy,” he said of himself and the other volunteers.

Last year, the Knights handed out 1,000 coats in the first hour of the annual coat drive, said Alex Cranstoun, the spokesperson for the D.C. state council of the Catholic fraternal organization.

This year, things were a bit different. They have 3,000 coats to give out this year, he said, but at that moment that had not given out nearly as many as a year ago.

Part of that could have been due to the weather, and part could be a sign that this year, things may be improving for the communities they’re looking to serve.

At the same time, Cranstoun said, the organization will make sure that all 3,000 coats are donated, “to make sure that no kids, no adults go cold” this winter.

There were a few moments, Cranstoun said, that organizers worried that they’d be unable to hold the coat drive on schedule. The new coats were shipped from overseas, he explained. And just like hundreds of other goods, they got hung up by glitches in the supply chain.

“We were worried for a while that we weren’t actually going to be able to hold the coat drive because they were stuck on a boat in Baltimore,” he said.

The Knights buy coats rather than seek donated coats, he said, “to make sure that the people that we’re giving out a coat to feel valued, and they know that this coat is just for them.”

There will be other distribution events this holiday season, Cranstoun said, until each and every coat is keeping someone warm.