Friends, family, and fellow veterans were on the steps of the Lincoln Memorial on Thursday to honor the more than 7,000 soldiers who have died since 9/11.
Listen now to WTOP News WTOP.com | Alexa | Google Home | WTOP App | 103.5 FM
(1/3) 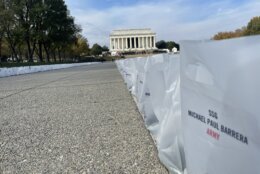 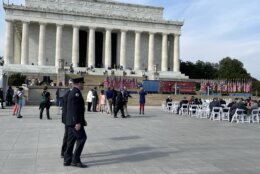 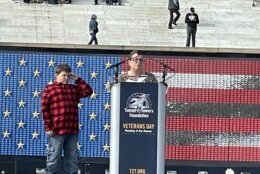 Friends, family and fellow veterans were on the steps of the Lincoln Memorial on Thursday to honor the more than 7,000 soldiers who have died since 9/11.

The event was organized by the Tunnel to Towers Foundation, a New York-based nonprofit that honored first responders killed as a result of the 9/11 attack.

“When you’re a Gold Star family, you do everything you can to continue telling the story of your fallen soldier,” said Jillian Hinton, whose husband, Army Sgt. Terrence Hinton, died during a military training in Hawaii four years ago.

Hinton brought the couple’s 9-year-old daughter, Cayleigh, to the event.

“You do absolutely everything you can to say their name one more time,” Hinton said.

Organizers lined each of the 7,070 service member’s names in small white bags along the monument’s reflecting pool.

She said Hinton, who’s also a friend and fellow single mother, asked her to come to the event. She quickly agreed.

“He gets no recognition for the tours he did in Vietnam,” LaRue said, speaking about her father. “I would only hope that their families think of them often. But if not, it gave everyone here the opportunity to hear who they were and what they did.”