D.C.’s Frederick Douglass Memorial Bridge begins opening to traffic this weekend, and on Tuesday the city held a ceremonial ribbon-cutting.

In addition to elected leaders, who planned and funded the project, people with ties to abolitionist Frederick Douglass participated in the event.

“May this bridge and all who travel upon it, be blessed,” said Rev. William Lamar, the pastor of Metropolitan AME Church, which Douglass attended when he lived in D.C.

“So it is so important — no matter where we live, no matter what ward, what neighborhood, what background, how long you’ve been here — that we come together, and we put bridges over challenges, bridges over things that have separated us in the past, and we form alliances to get things done for this great city of Washington,” the mayor said.

“What this bridge represents in so many ways, from contracting to better transportation to more sustainability, is the fair shot that we envision.”

A descendant of Douglass, Kenneth B. Morris Jr., said he’s often asked what his ancestor might think in certain circumstances. Morris said he was a punctual man and he might “share his own great satisfaction that the bridge that bears his name was finished ahead of time.”

Morris said that Douglass appreciated the virtues and benefits of physical exercise.

“I think that he would voice a hearty approval of the bridge’s unique accommodation for pedestrians and cyclists, and it’s designed providing opportunities for reflection and contemplation along the way,” Morris said.

The bridge is right next to Nationals Park.

“Frederick and his son Charles, my great-great grandfather, shared a special bond over their enjoyment of baseball that began here in D.C. In fact, when Charles became the president of the Negro League, Washington Mutual’s baseball club, they made Frederick an honorary member of the team in 1870,” Morris said. 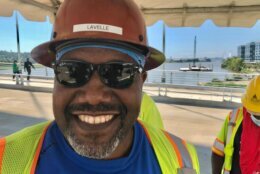 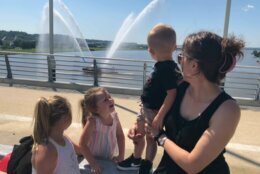 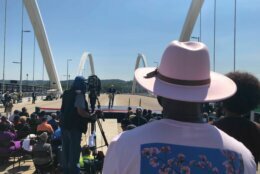 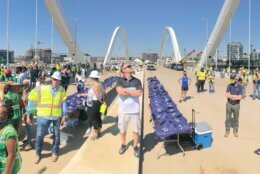 As the D.C. Fire Boat shot plumes of water into the air, members of the public listened attentively to the speakers.

“I think it’s beautiful, and I’m so glad our kids were able to see everything and learn more about Frederick Douglass. It’s an awesome event to be able to come to,” said Madison Keedy, whose husband has been working on the bridge doing fire lines and sprinklers.

Ward 8 council member Trayon White Sr. noted that 45 contractors from D.C. and 200 workers from the city worked on the project. “And that’s simply something to celebrate,” White said.

Construction worker Lavelle Patterson, 50, was born and raised in Southeast. Douglass is someone he admires and respects.

A worker who preferred to be identified only as Anthony, 65, has lived in D.C. his whole life.

“The old bridge has served its purpose and was beyond its time,” Anthony said.

Talking about his work on the new bridge, Anthony said it represents a great accomplishment.

“And it shows you that the infrastructure bill that they’re talking about passing really needs to be passed because our infrastructure in this country is terrible. I was underneath the Old South Capitol Street Bridge, the old Frederick Douglass Bridge. And if you saw what that bridge looks like, you wouldn’t cross that bridge,” he said.

Deconstruction of the old bridge will begin next week.

All details of the project — including an amphitheater as well as large landscaped ovals inside traffic circles — are expected to be completed by the end of next March.