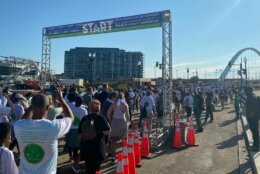 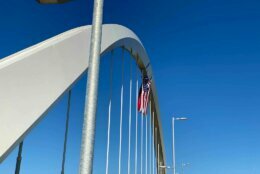 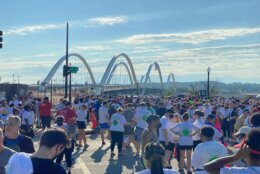 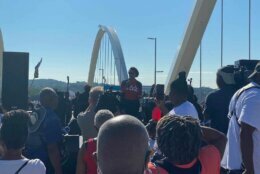 “It is only fitting that we come together to celebrate a bridge that will connect our city and pay tribute to a great Washingtonian,” said Mayor Bowser. “The Frederick Douglass Memorial Bridge is the biggest infrastructure project in the history of Washington, D.C., and it represents the best of our city’s past and future.”

Just after 9 a.m. on Monday, the crowd of runners took off across the bridge. Some runners booked it. Others used it as a way to get a first look at the new bridge.

“Well, we live in the Navy Yard. We’ve been really excited about the bridge opening up,” Lauren Murphy told WTOP. “We’ve been eyeballing this all during the construction. It’s been such a nice addition to the neighborhood to have it on the skyline, and now we can’t wait to get on it and check everything out.”

Others, like Anne Stauffer, stopped to take pictures on the new bridge, with its three large, picturesque arches.

“Oh, I think the bridge is beautiful. We actually were kayaking the other day and you can see it from the Washington channel, and it looks great.”

The 5K is part of a two-day event. The mayor will also hold a ribbon-cutting ceremony on Tuesday.

“It just looks like such a great addition to the waterfront, and I just wanted to be here,” said D.C. resident Schuyler Armstorng. “I wanted the opportunity to walk across it, but also it’s like kind of fun to do an outdoor event — and see the community and other community members and be outside and for a nice day.”

Construction on the new bridge began in February 2018. Last month, D.C.’s Department of Transportation announced that the bridge would open sooner than the spring 2022 projection.

According to a release, the bridge will open to regular traffic later this week.

The full project will be completed next year, after DDOT removes the old bridge and completes a new interchange.