A teenager was fatally stabbed Wednesday following an altercation with another teenager outside a D.C. school.

It happened near the Metrobus stop at KIPP DC College Preparatory on Brentwood Parkway Northeast.

There was a large gathering of young people in the area, and there was an altercation that happened between two of them, D.C. police Chief Robert Contee said in a news conference.

Chief Contee provides an update to the stabbing that occurred in 1400 block of Brentwood Parkway, NE. https://t.co/sO1cHLXU2E

The teenaged boy who died was 15 years old. The teenager accused of the stabbing is 16. Both were students at the school. The 16-year-old is in custody, Contee said.

“We do not know the reason for the altercation. But we know that a young man was stabbed as a result of this altercation in front of the school that he attends,” Contee said.

Contee offered condolences to both families of the students, saying, “Whether you are the perpetrator of the crime, or the deceased person in this case, is sad, period. Because this is something that did not have to happen.”

On the increase of violence involving juveniles, Contee said the focus should be on how to help young people resolve conflict peacefully, “without resorting to the use of a knife or gun or violence.”

“I’m sure that whatever the underlying issue is, it’s not going to be something that a kid, a 15-year-old kid should have lost his life over today, at the conclusion of school,” Contee said.

The school canceled classes Thursday and said that counselors will be available to students. There will also be added police presence and private security at the school in the coming days.

In a note sent to parents, Principal Stephanie Renee Young said, “We are heartbroken by this news and will update you as we learn more.” 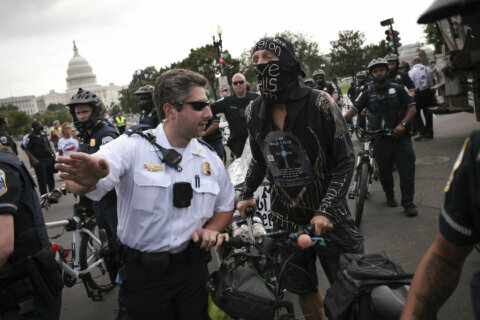