Police have released new photos and a license plate number of a vehicle they say was used by suspects in a shooting on 14th Street in Northwest  in D.C.
Listen now to WTOP News WTOP.com | Alexa | Google Home | WTOP App | 103.5 FM
(1/2) 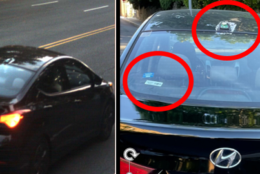 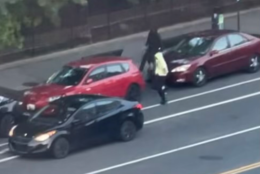 Police have released new photos and a license plate number of a car they say was used by suspects in a shooting on 14th Street in Northwest D.C.

The vehicle is described as a black, four-door 2016 Hyundai Elantra with Maryland tags 9CC2009. Images of the vehicle were captured by a camera near the scene of the shooting.

D.C. police released a video, which features security footage of the suspects and the vehicle in question.

Two men were injured in the July 22 shooting. They were taken to a nearby hospital where they were treated for what police described as “non-life threatening injuries.”

Anyone who can identify the suspects, their vehicle or has information about the incident is being asked to contact police at 202-727-9099 or text a tip to 50411. There is a $10,000 reward offered to anyone who provides information that leads to the arrest and conviction of someone involved in a violent crime in the District.