Building collapses in Northeast as winds whip through DC

A building that was at least three stories high collapsed as 50 mph gusts whipped through Northeast D.C. Sunday night. Scaffolding in Northwest came down, as did trees around the region.
Listen now to WTOP News WTOP.com | Alexa | Google Home | WTOP App | 103.5 FM
(1/3) 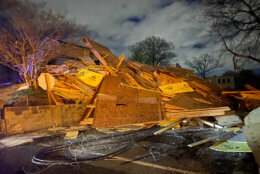 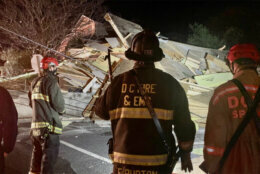 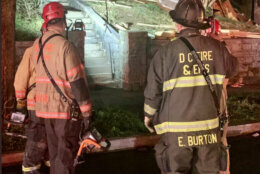 A building that was at least three stories high collapsed as 50 mph gusts whipped through Northeast D.C. Sunday night.

Update structure collapse on 20th St NE. All searches concluded by #DCsBravest with no evidence of anyone trapped. This structure was at least 3 stories high. Debris fills side street. @Dcra on scene. 3 adults & 3 children from adjacent home remain evacuated. pic.twitter.com/hyx21W3PVT

The structure fell apart around 9 p.m. on 20th Street near Rhode Island Avenue.

D.C. Fire and EMS sent in a canine rescue dog named Kimber to determine whether anyone was inside the building in the 3000 block of 20th Street. No one was found.

The building was either being renovated or was under construction, according to the fire department.

Structure collapse 3000 block 20th St NE. Major collapse of a structure either being renovated or under construction. Power lines also down. Search will be conducted once power is secured. No injuries reported. pic.twitter.com/476RrMXItT

Splintered wood and dry wall took down nearby electrical poles.

Six people — three adults and three children — in an adjacent home did have to evacuate during the collapse, but they were able to return shortly after.

A building inspector is investigating the collapse.

In a separate incident, Sunday’s storm caused a scaffolding on a four-story building on Prospect Street in Northwest to partially collapse. According to D.C. Fire and EMS, the scaffolding was found leaning over the sidewalk in a “precarious position,” forcing emergency crews to evacuated restaurants that were below it, including Peacock Café, Mai Thai and Café Milano.

Trees down across DC area

Powerful winds brought trees and wires down across the area, causing power outages.

As of 11:30 a.m. Monday, the WTOP Traffic Center reported the following street closures due to storm-related damage:

“We had really high winds overnight. Watch out for a lot of debris on the roadways,” Storm Team4 meteorologist Mike Stinneford said Monday morning.

Monday is expected to again be windy, with winds out of the northwest. Gusts will be over 25 mph as temperatures top out near 60 degrees.