A second U.S. Capitol Police officer who responded to the riots last week died while off-duty on Saturday, though the cause of death has not been officially announced.

The Capitol Police’s labor union announced the death of 15-year veteran of the force Howard Liebengood on Sunday.

Liebengood was one of the officers who responded to the Jan. 6 riots at the Capitol led by supporters of President Donald Trump in an effort to disrupt the certification of President-elect Joe Biden’s victory in the Electoral College.

Liebengood has been with the Capitol police since April 2005 and was assigned to the Senate Division.

Virginia Gov. Ralph Northam also announced Sunday he’s ordering that the flags of the United States of America and the Commonwealth of Virginia be flown at half-staff at all government buildings in Virginia on Monday.

On Saturday, New Jersey Gov. Phil Murphy ordered the same honor for Sicknick, saying he “embodied the selfless spirit of his native state.”

Sicknick also responded to the riots at the Capitol Building. Police said Sicknick died Thursday due to injuries sustained while on-duty, physically engaging with protesters at the U.S. Capitol. 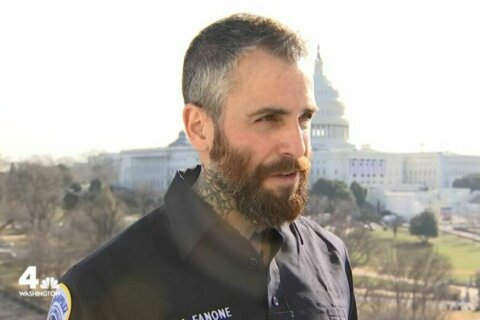