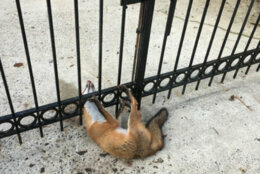 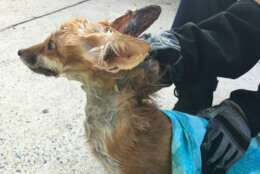 A fox that got its head stuck in the fence of a District home is once again roaming the D.C. area.

A Northwest D.C. homeowner Wednesday called the Humane Rescue Alliance about a fox that had its head wedged between the rods of a metal gate.

Elesha Young and Christina Best of the Humane Rescue Alliance arrived at the scene on Albermarle Street around 7 a.m.

Using soap to lubricate the animal’s head, the officers managed to free the captive creature, HRA said in a tweet.

After assessing that the animal was unharmed by the incident, it was released back into the wild.

The fox was last seen heading toward nearby Rock Creek Park, according to Washingtonian.

Officers determined the animal was about a year old.