Several groups of people escaped a treacherous situation on the Potomac River with help from D.C. Fire and EMS and police on Saturday when surging waters cut them off from the safety of shore.
Listen now to WTOP News WTOP.com | Alexa | Google Home | WTOP App | 103.5 FM

Three groups of people fishing and picnicking escaped a treacherous situation on the Potomac River with help from D.C. Fire and EMS, and police, when surging waters cut them off from the safety of shore on Saturday afternoon.

D.C. Fire spokesperson Vito Maggiolo said a storm surge — brought on by recent heavy rains — cut off their route back to shore and left them stranded on islands.

The rescue took place between Fletcher’s Cove north of Georgetown and the Chain Bridge. Maggiolo was asked whether the group was in immediate danger.

“They could have easily been swept away if the water kept rising, so the need to get to them and move them to safety was paramount,” he said.

Rescue workers in motorized inflatable boats known as Zodiacs made multiple trips to bring the groups back to safety.

Twelve people in total were rescued. Five adults and four children were taken to Fletcher’s Boathouse and evaluated by D.C. Fire and EMS medics. They did not require further medical attention.

Three additional people were rescued by D.C. police’s harbor unit and were dropped off on the Virginia side of the river, where they left the scene.

Maggiolo cautioned those who are planning a trip out to the river this weekend to stay alert near the water and never assume that an area is safe just because it doesn’t show any immediate signs of danger.

“Even without the heavy rain, the river can be deceiving,” he said. “It can look like it’s calm but there are very strong currents … if you fall into the river you can get caught up and twirled around and banged up against the rocks, the river may not let you go.”

Maggiolo said even in dry conditions people walking and fishing along the Potomac should be careful to leave themselves a buffer, because it’s easy to slip off the shore. During a rainy stretch like the region is currently seeing, that’s even more important.

“It was a complex and dangerous event and it came out to a successful outcome,” Maggiolo said. It’s not always so successful, he said, warning people to err on the side of safety and not put themselves or rescue units at risk. 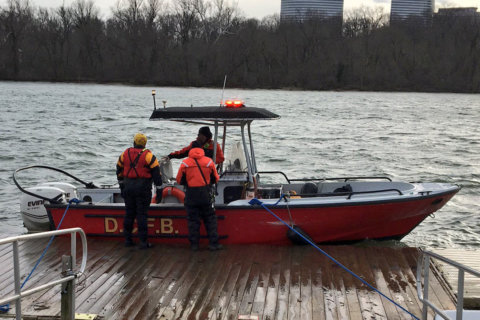