A car that crashed into the C&O canal Thursday night setting off an hours-long search for the driver was apparently the result of the man following faulty GPS directions, authorities say.
Listen now to WTOP News WTOP.com | Alexa | Google Home | WTOP App | 103.5 FM
(1/2) 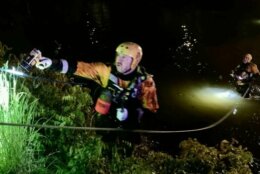 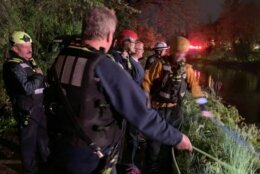 A car that crashed into the C&O canal Thursday night setting off an hours-long search for the driver was apparently the result of the man following faulty GPS directions, authorities say.

D.C. Fire and EMS were called to the C&O canal Thursday night shortly after 8 p.m. for the report of a car partially submerged in the canal near Chain Bridge Road.

Photos and videos tweeted by the fire department showed a white sedan in about waist-high water near the banks of the canal. But a search of the car, trunk and nearby banks by emergency crews didn’t turn up any occupants.

The man was found several hours later walking along the nearby Clara Barton Parkway, U.S. Park Police Sgt. Eduardo Delgado, told WTOP. The man was treated for exposure and hypothermia but declined to be taken to the hospital.

Update water rescue the Canal south of Chain Bridge NW. Search of passenger compartment found no one. #DCsBravest continue to search the adjacent bank and the trunk. pic.twitter.com/vpHQv3nucO

The man was not impaired, according to the police report, but he was cited for failure to travel on park roads and designated routes. Authorities did not identify the man.

The police report said the man was driving along K Street Northwest in Georgetown when he said his GPS directed him onto the Capital Crescent Trail near the Alexandria Aqueduct. The man traveled along the bike trail, which runs parallel to the canal for about three miles, before his car wound up in the canal.