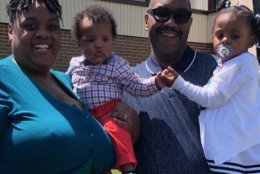 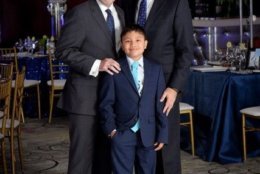 For more than three decades, D.C. has hosted an Adoption Day and at this year’s annual celebration, dozens of families who have already created forever homes in spirit will add legal fusion to their family units when a judge signs their child — or children’s — adoption decrees.

When Dawn Mitchell-Washington and her husband Errin Washington legally adopted a little girl a few years ago, they didn’t know a brother would soon be on the way months later.

But the spark to foster and eventually adopt started some time ago.

“So there was a child that I fostered when I was single, and I wasn’t able to adopt her, and it just really set my mind that, hey, all these kids don’t have the success story to be able to go back to their birth families,” said Mitchell-Washington. “There are some kids that’ll be left behind, and it’s not right. Every child deserves a loving family and a home.”

When she got married, Mitchell-Washington said that she and her husband tried for years to have their own children and then when they realized it wasn’t happening for them, she brought up the idea of fostering.

“He jumped at it,” Mitchell-Washington said, noting that they’ve had about 12 children in their home. “We had the opportunity to adopt my oldest daughter and because we had her from such a young age, we just were unwilling to really allow somebody else to step in and become her parent if we had the opportunity to [adopt] as well.”

They fostered their oldest daughter since 2016, when she was five days old. Her adoption was finalized in May of 2018.

Fourteen months after the little girl’s brother was born in September 2018, The Mitchell-Washington family is legally adopting him too and joining dozens of other families who will be present Saturday during the D.C. Superior Court and the DC Child and Family Services Agency’s 33rd Annual DC Adoption Day ceremony.

Several of the other children are biological siblings who also will be adopted into the same families.

The public is invited to the celebration at the 3rd Floor Atrium at the Moultrie Courthouse, 500 Indiana Avenue, N.W. The ceremony and celebration starts Saturday, Nov. 16, 2019 at 10 a.m. and lasts until noon.

According to D.C. adoption statistics, as of Sept. 30, there were 796 children in the city foster care system. Some of them will return to live with their parents, others will be adopted by other relatives. Some of the children have guardians or are living with pre-adoptive foster parents. Others are at the age where they can choose not to be adopted.

The city’s Child and Families Services Agency is looking to find forever homes for 60 of those children.

Craig Lustig and his husband Pete Carter will also be celebrating the official adoption of their son Joshua, who has been in their care since a social worker brought him — as a toddler — in April of 2013. They originally completed training to become an LGBT-friendly foster family for teens.

“If there was a kid who needed support, we wanted to be there, and maybe it wasn’t quite with our model of what we expected, but that is how — that’s how foster care works, and maybe that’s how life works, right? Things come at you and you have to kind of just go with it,” Lustig said.

At first there were some things to get used to — like proofing their home for a toddler and getting a crib, but that’s where family and friends stepped in.

“Before we knew it, somebody had given us a crib they were about to get rid of. Then people, and our neighbors said, ‘oh we have toys that would be perfect for a toddler,'” Lustig said.

Lustig and Carter gained custody of Joshua when he was about to enter kindergarten. Then, a year and a half ago, they petitioned the court to adopt him.

“It’s important for the health of the community that we provide that level of permanency for every child. It wasn’t just enough for us, let’s say, to have custody,” he said. “A forever family is strong. A forever family is — it’s like really deep roots. How can that be anything but valuable to our community?”